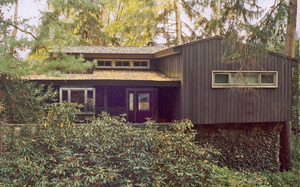 Of the three best known post World War II modernists of the Architecture Faculty of Penn State, Ken Heidrich is undoubtedly the least well known, at least by name.  Indirectly his work is known by thousands of locals as one of the members of the design group for the beautiful, contemporary high school buildings on Westerly Parkway.

(Permission is grated to reproduce copies for individual use, not for resale)