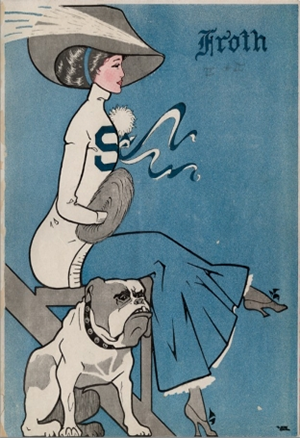 Penn State Froth was founded and established to replace Penn State University's first humor magazine, "The Lemon," which published its final issue on June 10, 1908. Froth became wildly popular among students and it also became influential to the culture of the university. Froth’s mascot, a jester named Frothy who graced the covers of many of the earlier issues, eventually began making personal appearances along with the Nittany Lion at Penn State football games. The initial run of Froth lasted until 1943. It stopped production during World War II due to a lack of staff members. During the 1920’s Froth was sold not only on the Penn State campus and in State College, but also in 17 other Pennsylvania towns and cities, as well as in Washington, D.C.; Providence, Rhode Island; and Syracuse, New York. This popularity led to Froth being named the "Best Managed Humor Magazine" by College Humor Magazine for 1930-31.

n 1946 after World War II ended, Froth resumed printing, but was halted in 1962 when the Committee on Student Organizations, responding to administrative complaints, found that Froth had "violated standards of good taste," and revoked its status as an authorized student group. In 1965, Froth resumed printing again, but it lacked the popularity among students and the community and saw a decline until an editorial team revived it in 1977. However, as the last members of that group from 1977 graduated in 1981 and 1982, it eventually collapsed. In 1999 the magazine was revamped and the spelling was changed from “Froth” to “Phroth”. The complicated history of Froth is best described in a masthead reading: “Founded 1909, unfounded 1962, re-founded 1965, confounded 1969.”

When using this site, please keep in mind that despite its wide-scale popularity, it still was a humor magazine, so there are many images, graphic design elements, and passages of text that can be suggestive and oftentimes offensive.

Questions about the publication may be directed to University Archivist Ben Goldman or phone 814-865-3214.