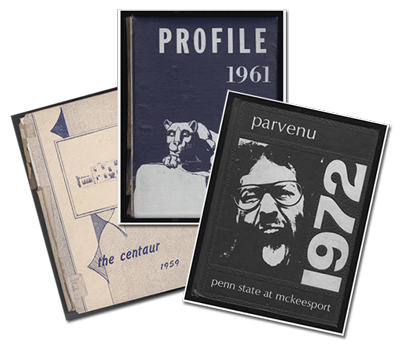 The Greater Allegheny Campus Collection is comprised of student yearbooks: “The Technician’s Log” (1955) celebrating the first graduates of the campus to receive the Associate in Engineering degree.  “The Centaur” (1956-59) which depicts the initial years at McKeesport campus including a dedication to benefactor William L. Buck who donated the land for the campus, forwards that mention the campus’ history and development, and various snapshots of campus life. “Profile” (1960-63) and “Parvenu” (1971-72) have a variety of images of campus buildings and student life including images of campus construction projects.

Greater Allegheny campus opened in 1948 in Dravosburg, a suburb of Pittsburgh. The campus offered occupational training to returning war veterans. The center was then relocated in nearby McKeesport in 1952. William L. Buck donates 10 acres of land in 1956 to develop a permanent campus for the McKeesport Center. From the 1950s through the 1970s the campus expanded from its first building, Main, to constructing the E. R. Crawford Building in 1959, the Buck Union Building in 1961; and adding three buildings in 1972-73 the Kelly Library, Ostermayer Laboratory, and the Wunderley Gymnasium. In the 1990s the campus added computer labs and multimedia classrooms that greatly enhanced students’ experience. The campus made additional improvements by replacing the Buck Union Building with a 25,000 square foot Student Community Center in 2003. In the pursuit to offer cutting edge technologies for its students, it was one of the first campuses to fully integrate wireless network in the campuses buildings. In 2005, the campus became a designated international campus meaning that it is one of the official destinations for international students. The campus changed its name in 2007 to Penn State Greater Allegheny to reflect the campus’ expanded mission.