United Mine Workers of America, President's Office Correspondence with Districts, 1894-1983 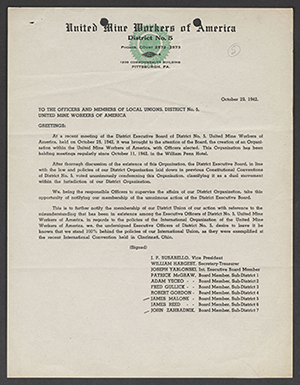 The United Mine Workers of America (UMWA) was founded in 1890 and is an active American labor union that represents the rights of workers in various industries, including mining, manufacturing, and health care, among others.

The UMWA Office of the President was formed in 1890 at the founding of the UMWA. The duties of the office historically included: presiding over international union conventions and meetings of the International Executive Board; appointing committees, organizers, and field workers; interpreting the union constitution; leading wage negotiations; endorsing or denying strikes and work stoppages; ruling on individual, local, and district issues; serving as the union's spokesperson for legislative goals and health/safety concerns; and supervising the editorial stance and news policies of the United Mine Workers Journal.

This correspondence documents the issues that filtered through district representatives in situ to executives at UMW district and international offices, as well as the presidential decisions on action to be taken. Local union conditions, mining disasters, organizing activities, wildcat strikes, rivalries with competing regional unions, elections, and diverse grievances are among the concerns that reached the president.

There is a small amount of President-District correspondence and related records for several districts from the period 1894-1910 and a slightly more substantial run in the years 1911-1919. The bulk of these records date from 1920-1982, documenting the presidencies of John L. Lewis, Thomas Kennedy, William Boyle, Arnold Miller, and Sam Church.