The Stones of the Obelisk 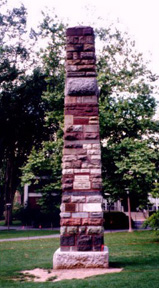 Constructed in 1896, the obelisk, also called the polylith, stands 32.7 feet high and weighs 53.4 tons. This "pile of rocks" was created the same year the College of Earth and Mineral Sciences (formerly the School of Mines) came into existence. The obelisk, built by State College stonemason Michael Womer, began as a kind of answer to all the requests the college had been receiving for information on stones.

The Mining Bulletin recorded, "The numerous enquiries which this Department has been receiving regarding the nature, durability or appearance of certain specified stones, or concerning the identification of a specimen, have impelled the authorities of the College to attempt the erection of an obelisk out of the representative building stones of the Commonwealth, and thus to furnish in a substantial form an attractive compendium of information for quarrymen, architects, students, and visitors."

Magnus C. Ihlseng, Penn State's first Professor of Mining Engineering and Geology initiated its construction. He desired to create an instructional yet artistic monument which would test the weathering qualities and commercial value of Pennsylvania's building stones. In a letter to President Atherton, after its completion, he wrote, "It exhibits many of the varieties of structural material with which Pennsylvania is endowed and reveals to the architect at a glance the possibilities of artistic combinations from our native products...Thus the column is not only picturesque but exceedingly valuable to student, visitor, and artisan." Professor Ihlseng considered the obelisk to have been the "greatest single expenditure for the year" of the college- $708.09.

The obelisk consists of 281 blocks of building stone from 139 different localities, mostly in Pennsylvania, and its components are arranged to represent the geologic column of the rocks of Pennsylvania, with the oldest rocks at the bottom and the youngest at the top. These stones include pre-cambrian rocks, the oldest in the state, to the youngest triassic rocks which were formed during the age of the dinosaurs.

The Obelisk has seen the entire 20th century come and go - from horses and buggies passing just a few yards away on Allen Street, and the train to Bellefonte pulling out of the nearby railway station, to Penn Staters orbiting overhead in the space shuttle. As one of the oldest Penn State monuments on University Park Campus, the obelisk stands as a testimony to the those who have contributed to the development of the College of Earth and Mineral Sciences and the University as a whole.