This is perhaps Heidrich’s ultimate house! Located centrally on West Park Avenue opposite the Penn State White Course, it has a spectacular view to complement its spectacular design. Many motifs recall the early 19th Century Arts and Crafts movement (when Wright was creating his prairie homes), but Heidrich melded them in his own unique way. 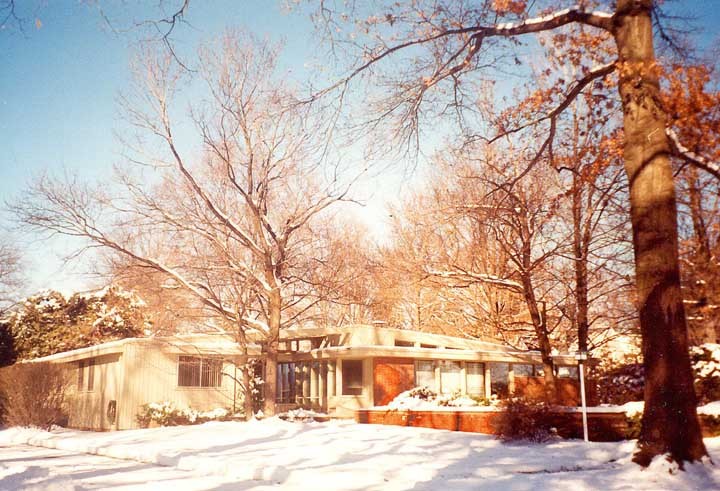 Facing southwest, the house is U-shaped with a bedroom wing to the west (left, above) off of the large central great room. To the East along Fairway Avenue are a large kitchen, laundry and sewing room, double-car garage, and large office space. The latter could also be used as a separate apartment. 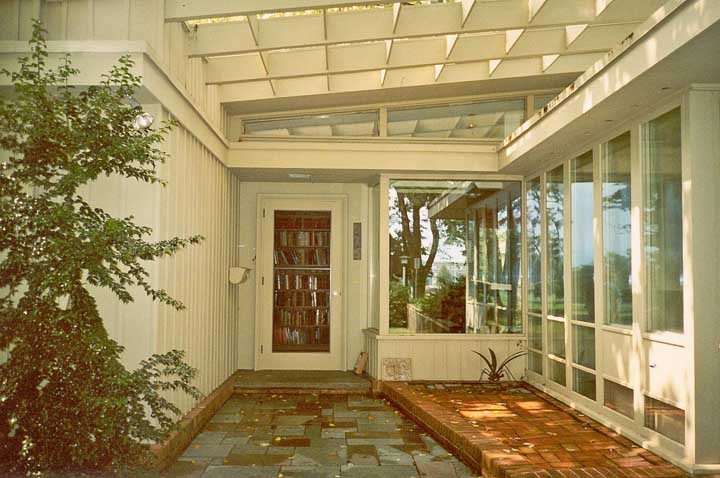 The extensive glass in the entry way makes it extremely inviting. 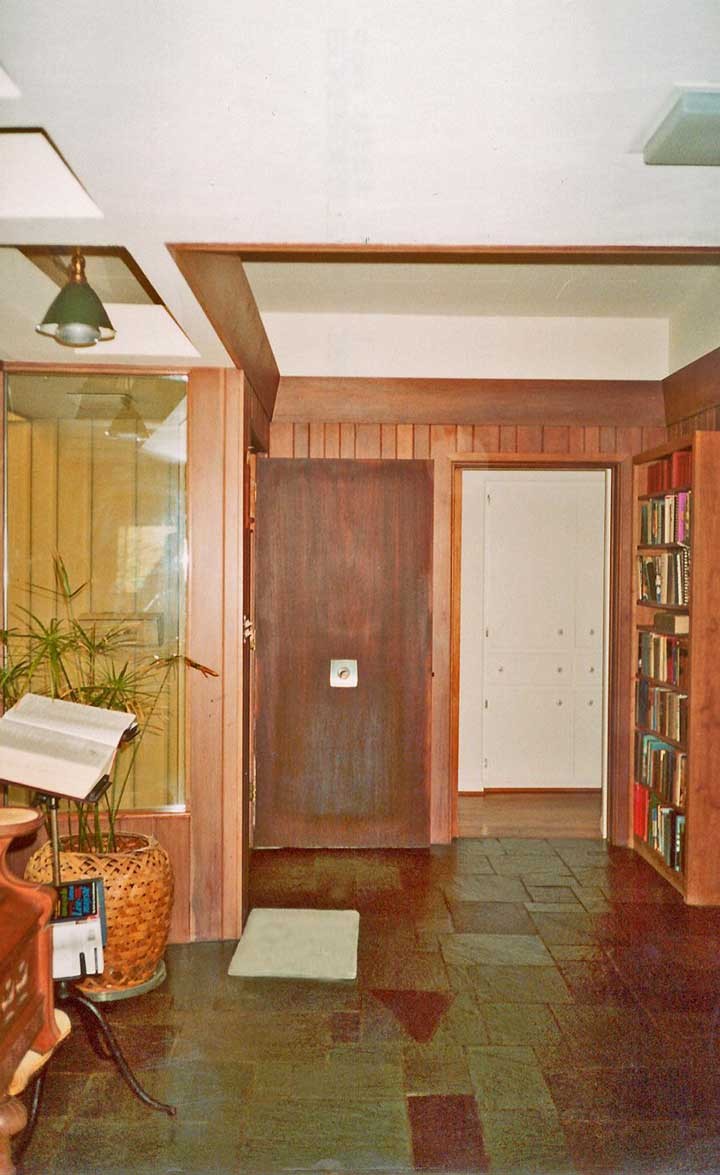 The foyer inside is equally welcoming. Note the distinctive center-mounted doorknob.

View from foyer to the University golf course.

The hall to the bedroom wing shows extensive built-in storage. 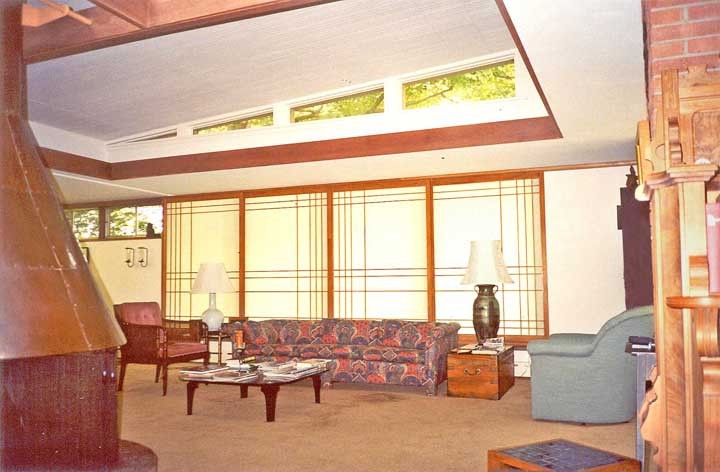 The Japanese-style sliding screens were added to the great room window wall by the current owners
to protect against the southern sun. When open, the view is to the golf course. 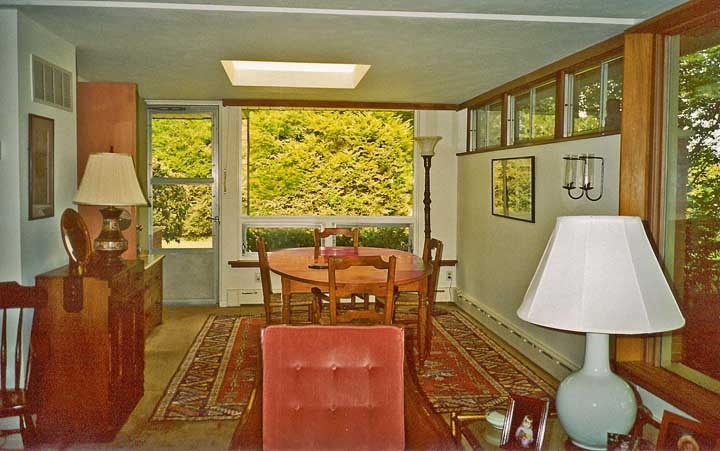 The dining area picture window faces east with a garden area beyond. 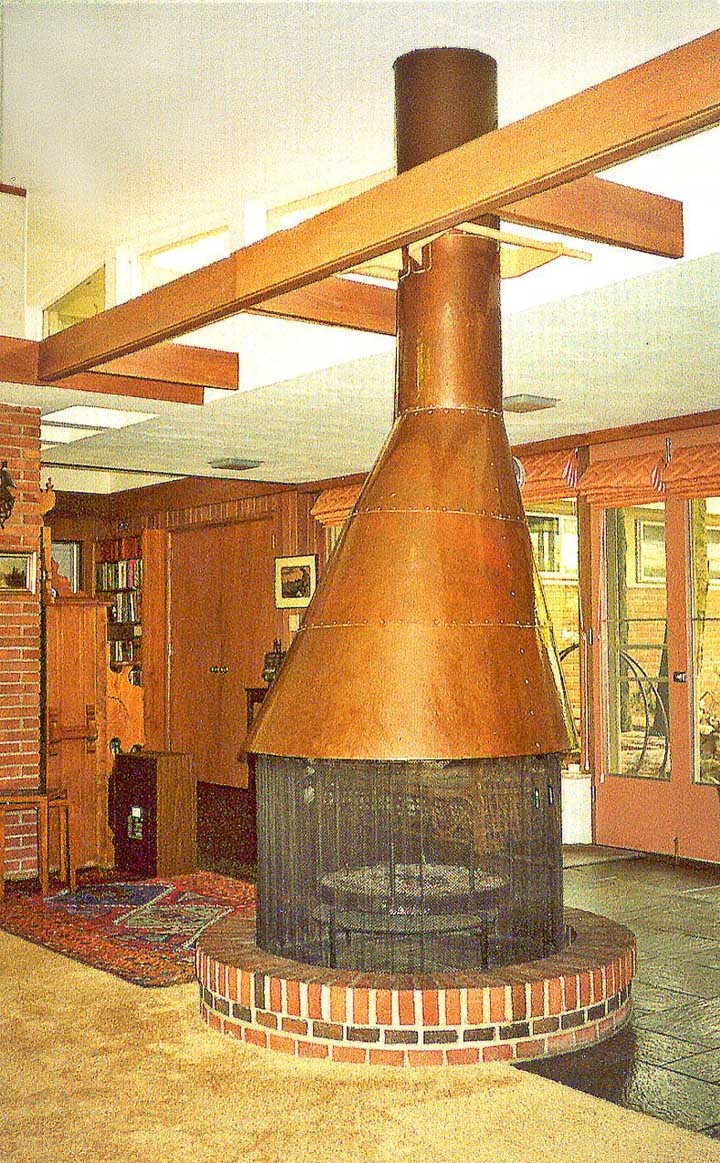 The “inverted funnel fireplace,” so-called by Heidrich’s then teen-aged son Gery, is easily the dominant object in the great room. Gery had the job of keeping it polished. 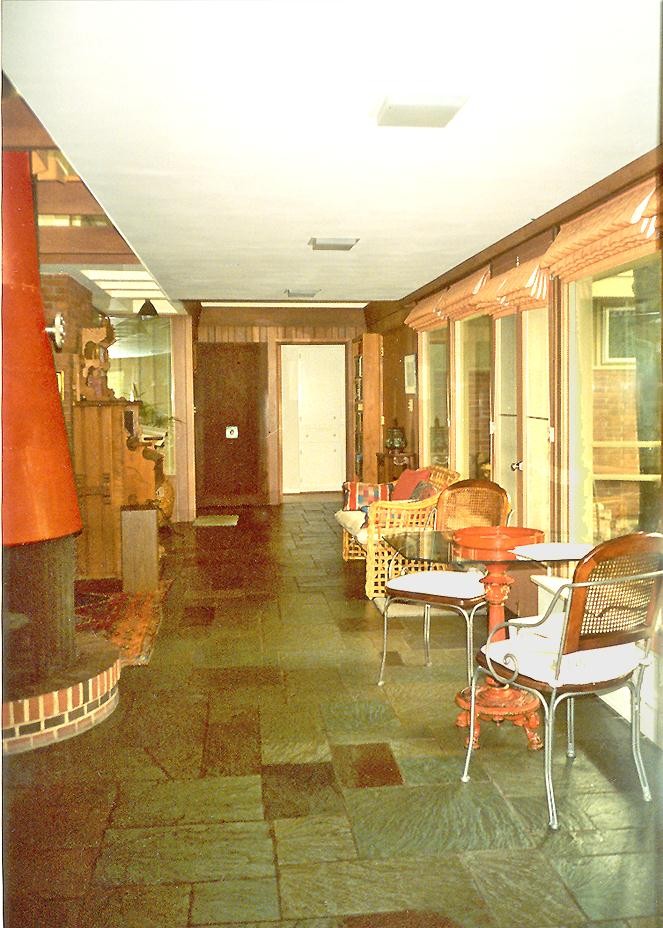 Beyond the fireplace is a porch-like area. With its own window wall, one can pretend that it’s summer in the wintertime. The fireplace is easily the focal point of the great room. While Heidrich’s designs were eclectic, they often featured a low shed roof and clerestory windows. 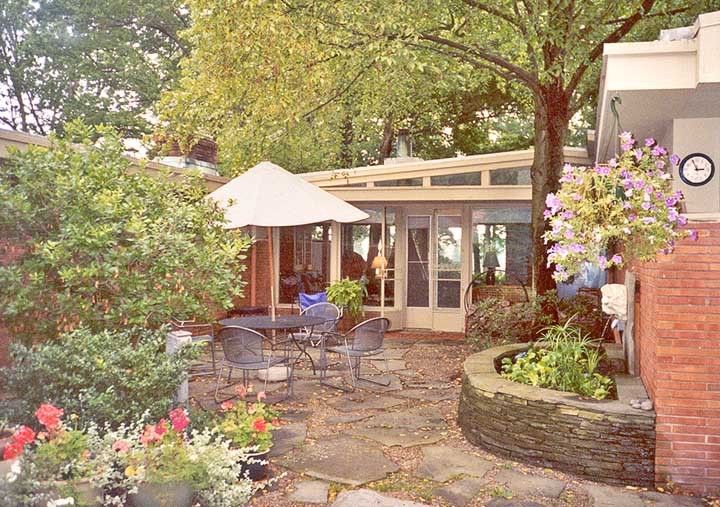 In the summertime the courtyard is the spot to be in. The mature trees and plantings make it a truly delightful place. 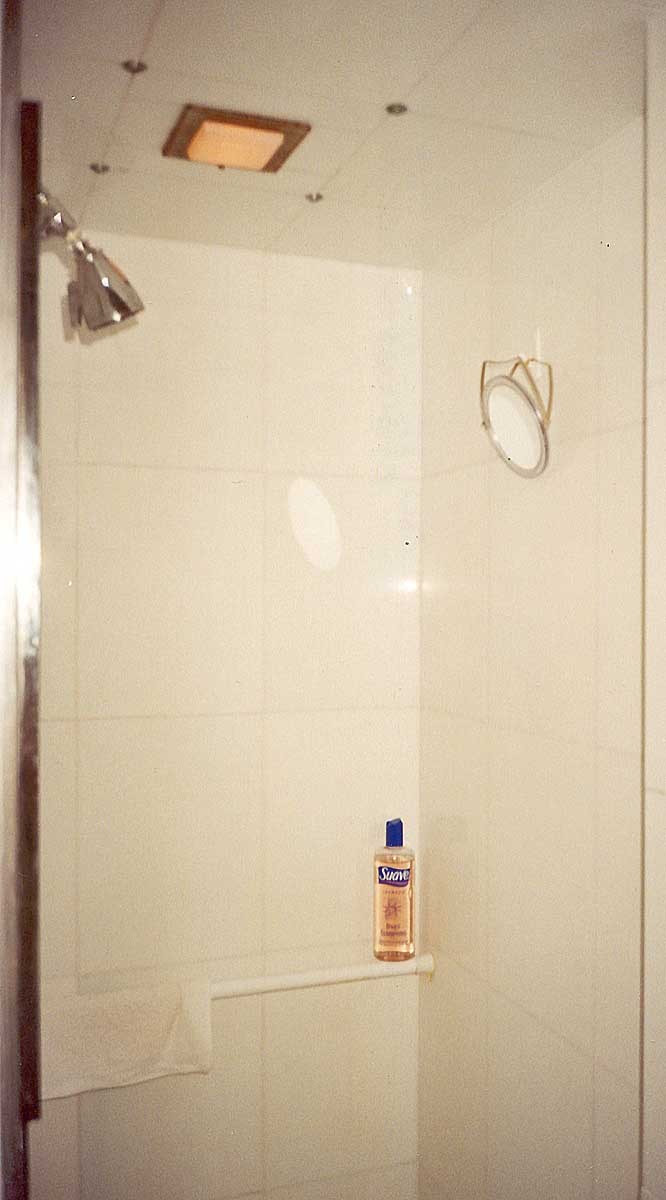 The bathing area in the master bedroom has a shelf for toiletries. 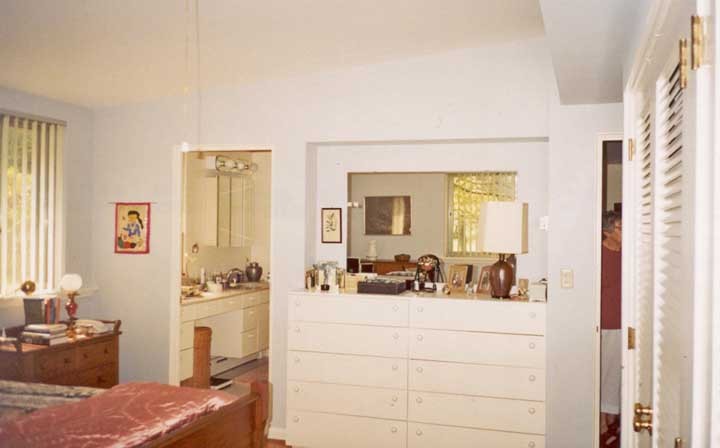 The master bedroom has a built-in dresser and mirror. 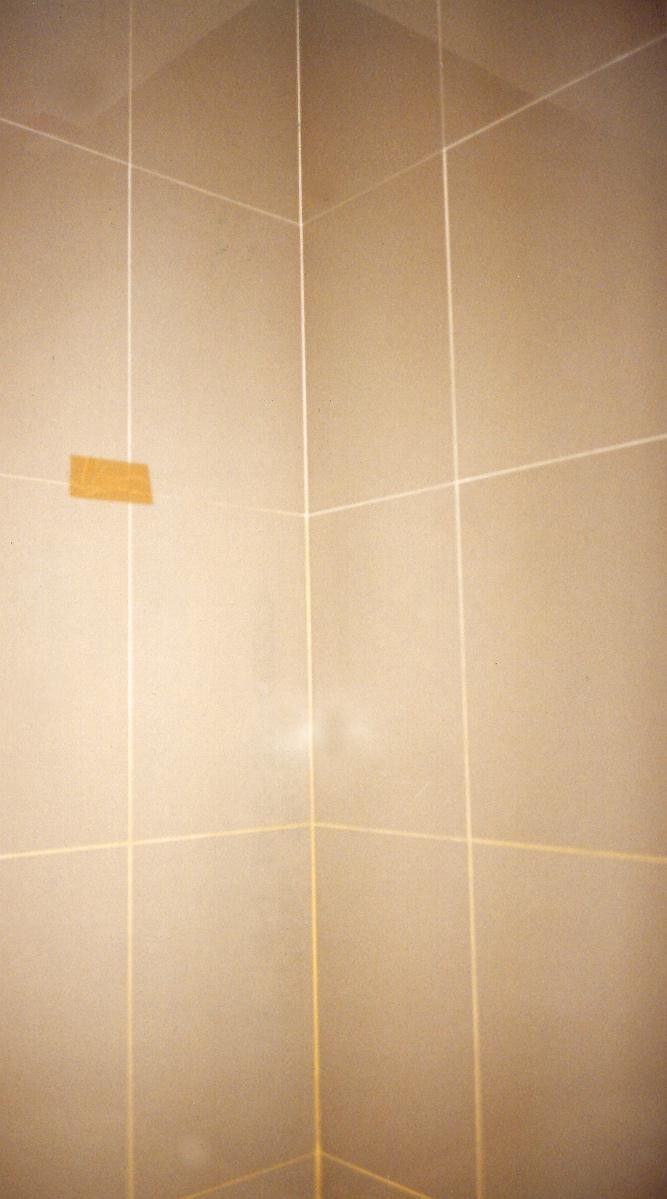 Unique glass tiles are used to line the bathing area in the master bedroom. 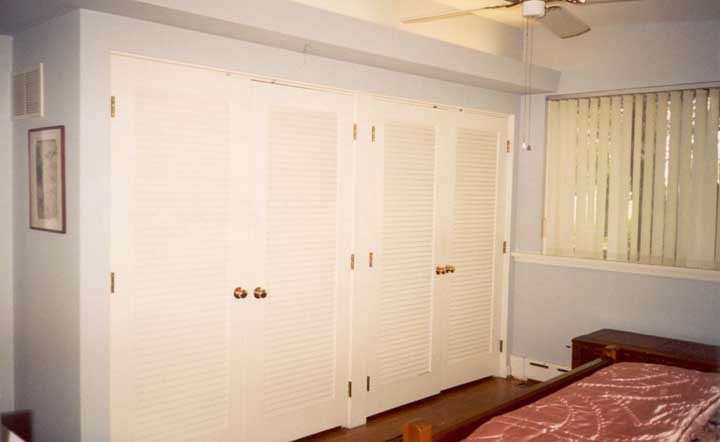 As typical of the period, the master bedroom has a full closet wall. 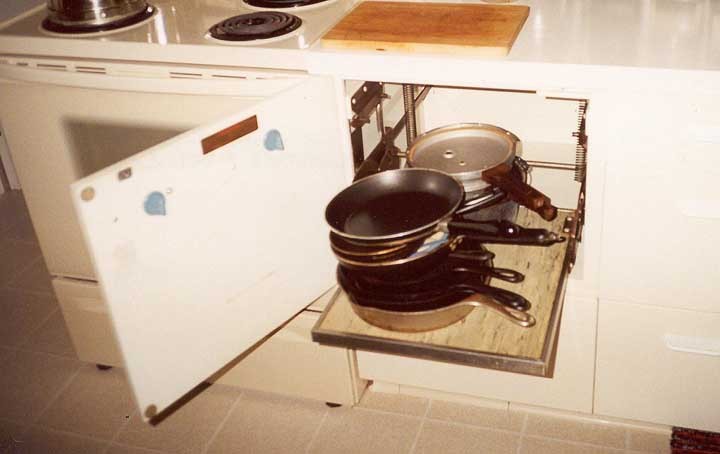 The pull-out shelf in the kitchen also pops up; it is intended for a food mixer. 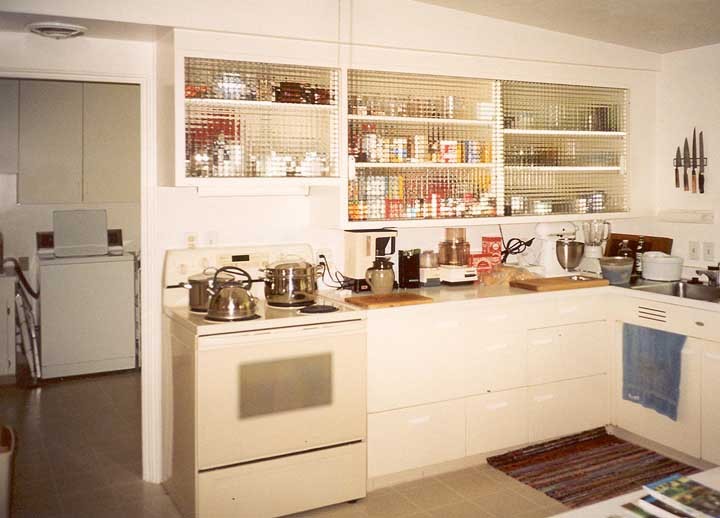