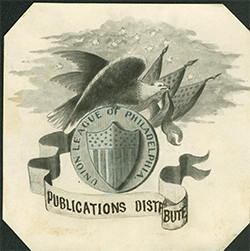 Founded in 1862 as a patriotic society to support the Union and the policies of President Abraham Lincoln, The Union League of Philadelphia (Union League) laid the philosophical foundation of other Union Leagues across a nation torn by Civil War.  The Union League supported the Union cause in various ways, from raising troops and funds to publishing propaganda pamphlets distributed throughout the country.

The Board of Publication first met on February 26, 1863, “for the purpose of printing and circulating useful information,” and to “disseminate patriotic literature.”  It was intended to build and maintain the energy, enthusiasm, and pro-Union opinion of loyal Americans as well as to encourage the northern armed forces.  For decades, pamphlets were used as a means to quickly, and with modest means, disseminate information, and were frequently used for propaganda purposes.

Many of the pamphlets published by the Union League had no reference to the publisher inside in order to avoid destruction or confiscation by southern supporters.  Other pamphlets were cleverly disguised to get through enemy lines.  The Planter’s Almanac for 1864 appeared to be a standard almanac, but also contained pro-Union propaganda aimed at encouraging Confederate soldiers to desert.  Pamphlets were sent across the country to many cities, Union Leagues, hospitals, and military outposts.  By October 1868, 4.5 million copies of 145 pamphlets and 44 lithographs and posters were created and distributed.