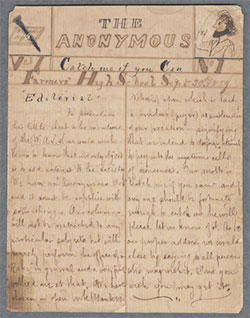 This collection consists of four issues and an extra edition from the first volume of the Anonymous, a newspaper that collected anonymous gossip about students and faculty. Members of the Washington Agricultural and Literary Society launched the Anonymous in 1859 in the hope that it would increase interest in the society. Milton Lytle of Spruce Creek, whose digitized diaries are also available on the People’s Contest site, was an editor of the Anonymous during his tenure at the Farmer’s High School, beginning in 1860. The Anonymous was modeled after what was known as the “flash press.” The flash press emerged in New York City in the 1840s and was marketed to young sporting men whose pastimes often included gambling, drinking, and brothel-going. By writing about such pursuits the flash press mocked popular moral reform newspapers of the period and criticized social elites who presented a public image of respectability but who were privately scurrilous in their behavior. These papers’ salacious content included gossip items that anonymous readers could place in the papers as ads under the heading of “wants,” as in the reader “wants to know” if this gossip is true. The Anonymous similarly published unattributed gossip about students’ activities on such topics as their attempts to court local women, their travel to surrounding towns primarily to procure alcohol, and even their sexual encounters (addressed indirectly in euphemistic terms).