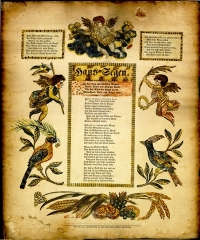 This online bibliography, "German-Language Broadsides in North America, 1730-1830," represents a significant piece of a joint scholarly publishing project between the University Libraries and the Penn State University Press. The other two components of the project are a monograph by Hermann Wellenreuther, titled Citizens in a Strange Land: A Study of German-American Broadsides and Their Meaning for Germans in North America, 1730-1830, and a print bibliography, which shares the title of this online bibliography and was compiled by Wellenreuther and his colleagues Reimer Eck and Anne von Kamp. The online bibliography is intended to be an evolving, searchable resource. By making bibliographic descriptions of German-American broadsides from this era more widely available via Web-based access, we hope that researchers can contribute additional information about them, perhaps enhancing the accuracy of these records or adding to the number of images referenced by them.

Like its print counterpart, the online bibliography shows a brief record for every broadside printed (or partially printed) in German, from 1730 to 1830, in what is recognized today as the United States. Unlike the print bibliography, however, the online version displays many more images. Researchers should find the broadsides recorded here rich in subject areas such as folklore, religion, hymnology, German language, anthropology, and art. The broadsides expand on what is known about German settlers in the Middle Atlantic region. As Wellenreuther notes, "They suggest settlers were consciously developing their own German-language world -- in religious as well as political and economic terms -- within a larger English-language culture. They strongly indicate continuous, vivid ties between North America and the key regions from which the Germans came, particularly Württemberg and Baden. They supply material for the rewriting of radical pietistic thought, on the one hand, and for a description of the settlers' remarkable aloofness from established churches like Lutheranism or the Reformed church on the other.

Due to ownership restrictions some images are not available online. If you have questions about an image please contact the Penn State Libraries directly.