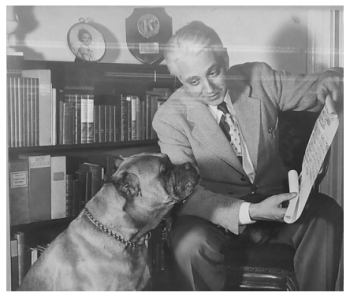 A highlight of the Eiche Collection is the story of the Eiche family’s pet boxer named Thor, who served in World War II as part of the “Dogs for Defense” initiative. Thor received specialized military training and worked as an army service dog for 18 months during the war, and he became a local celebrity when he returned home to his family in Altoona. On his “daily rounds” around the city, the dog veteran visited local restaurants, florists, and retail stores where business owners would give him treats. At the end of the day, he would come home via the bus or a taxi cab, often with flowers or ribbons tied to his collar.