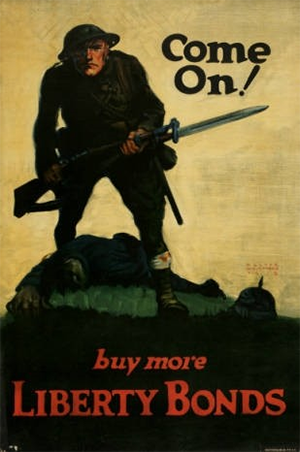 The poster was a major tool for broad dissemination of information during war, as countries on both sides of a conflict distributed them widely to garner support, urge action, spread messages, warn of the evils of an enemy, and boost morale. Many posters asked men to do their duty and join the military forces. Others asked those at home to conserve food, buy bonds, promote the productivity of labor, support the Red Cross and other relief agencies, or raise money for the war effort. Some reflected the changing role of women, as women appeared in uniform and performed war work. The posters in this collection cover many subjects and agency creators, notably the U.S. Food Administration, with stunning images that include illustrations by well-known artists commissioned by the U.S. Government, including Ben Shahn, Norman Rockwell, Howard Chandler Christy, James Montgomery Flagg, and Jessie Willcox Smith. The posters of World Wars I and II were acquired as a gift in 1965 from the late Louis F. Peck, Penn State Professor of English.

The digitized collection also includes protest posters against the Vietnam War (1961-1975) and from American Civil Rights and Black Power movements associated with campus unrest in America during the late 1960s and early 1970s. Images include activists such as Stokely Carmichael and Bobby Seale.