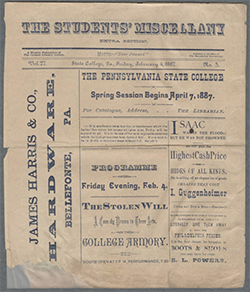 This collection consists of one issue of The Students’ Miscellany from 1887 and the handwritten script for Miscellany issues from April, May, and October1893. The Miscellany was a newspaper that featured college news, humorous stories and poems, and cryptic rumors about the romantic activities of students and Cresson Society members. The Cresson Literary Society formed simultaneously with the Washington Agricultural Literary Society (later, the Washington Literary Society) in March 1859, only a few years after the founding of the Farmer’s High School. The entire all-male student body were members of one or the other of the two societies. The Cresson Society named itself in honor of Elliot Cresson, a Philadelphia merchant and philanthropist. Both societies received a $250 appropriation from the state legislature to create libraries for the benefit of their members. Antebellum collegiate literary societies functioned as an adjunct of the official educational curriculum. Members participated in competitive debates and essay writing and oratorical contests. In the late nineteenth century, the rise of fraternities, organized athletics, and other kinds of clubs gradually diverted interest from the literary societies, leading them to disband in 1895.