The Smith Letter:
In 2008, James B. Smith, a local contractor, wrote a brief letter detailing his experiences both working on the construction of two Heidrich houses (Osborn House and Cannon House Addition) as well as building and living in a Heidrich home of his own (J.B. Smith House II).

Elburt Osborn joined the College of Mineral Industries at Penn State in 1946. He served in various capacities, including Dean of the College of MI and Vice President for Research of the University. He retired as Professor Emeritus of Geochemistry.

He also served the national government as Director of the Bureau of Mines of the U.S. Department of the Interior under President Richard M. Nixon. His wife, Jean, was an amateur painter. She painted the portrait of Wheeler P. Davey for the Davey Laboratory building on campus.

Their home is on a sloping lot with many trees just off of Garner Street. The house is two stories with the main entry at the upper level on Irvin. There is a lower level door to the rear, as well. Depending on the season, there are views of the Tussey Mountains to the South from the back side of the house. 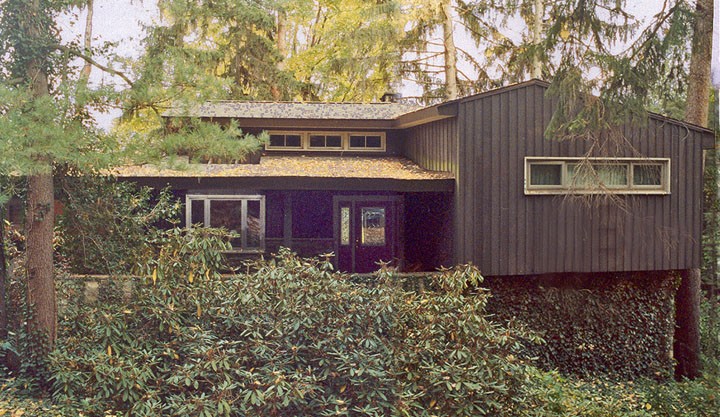 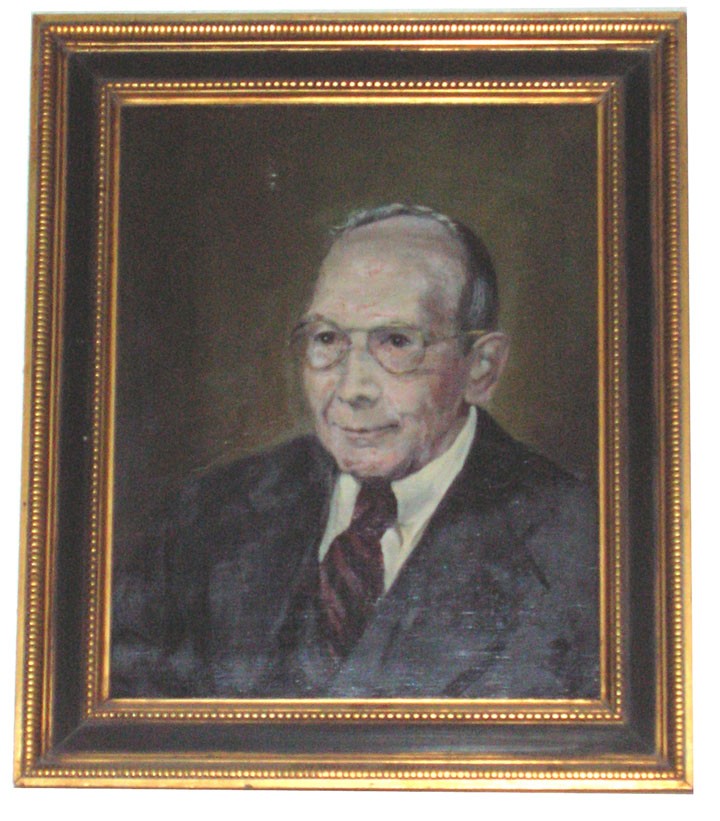 Jean’s portrait of Wheeler Davey is shown. The picture hangs in the lobby of the connector between Davey and Osmond buildings. 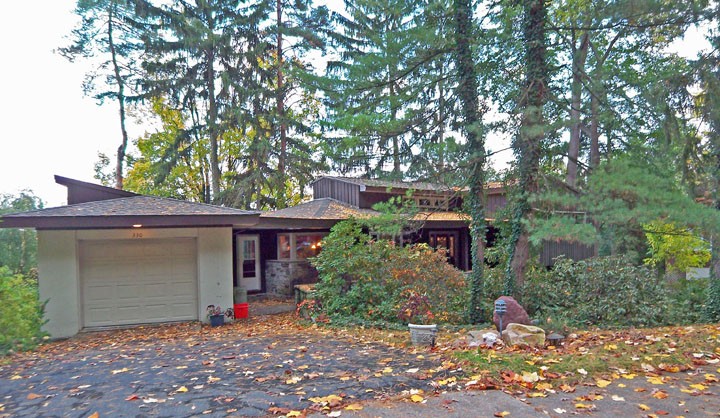 From the driveway most of the house is hidden by trees and shrubs. The front entries are via the porch, with the first door to the kitchen and the main door to the right. Jean used the garage as an art studio, hence the raised portion of the roof to the left. 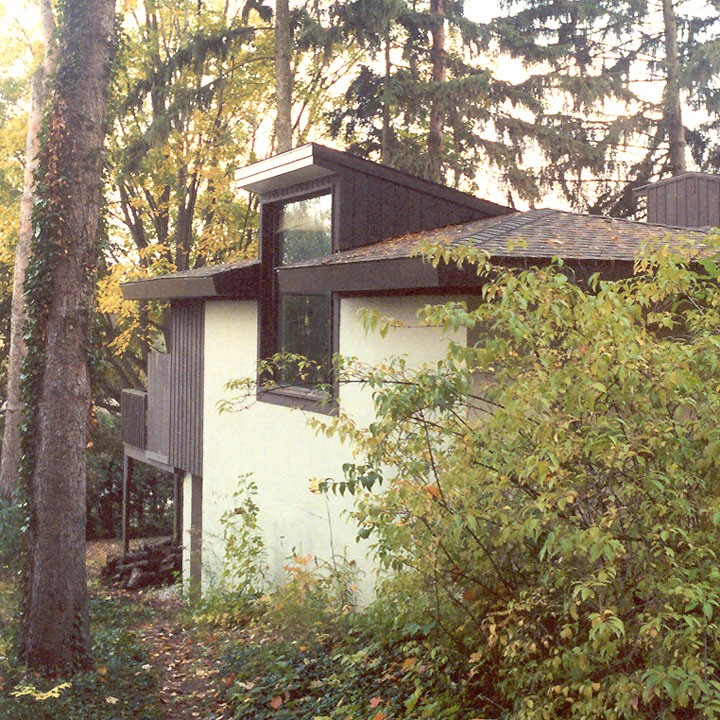 The side of the garage is shown with its large “art studio” window. The rear deck is seen beyond. 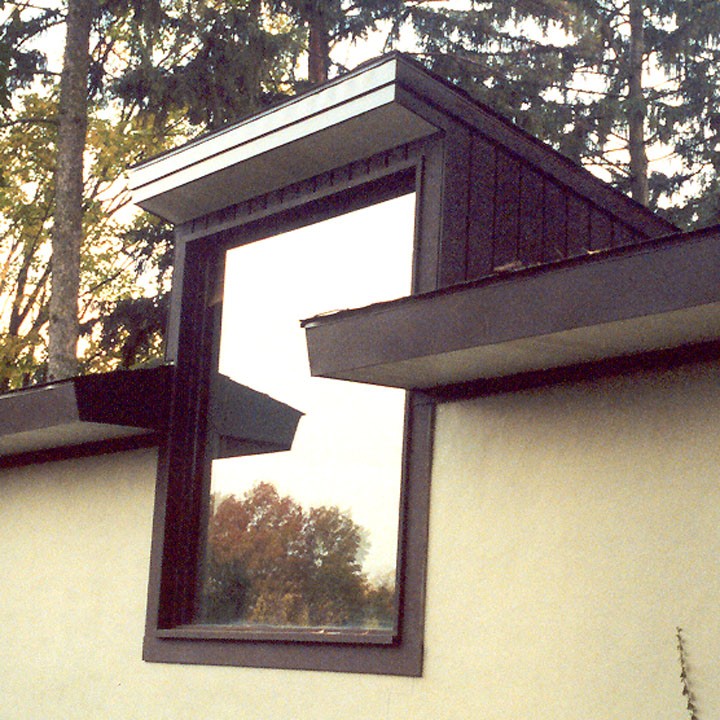 This close up of the art studio window shows an overhang to reduce glare. 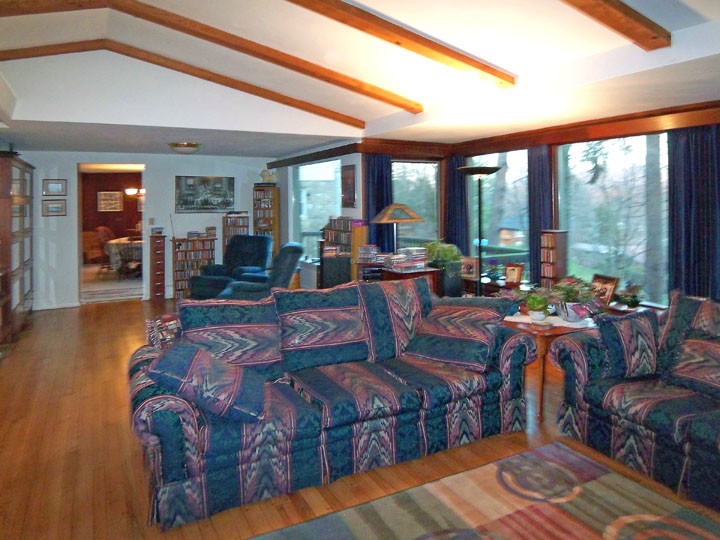 The generous Living Room has a wall of windows to the south side with a distant view of the Tussey Mountains. 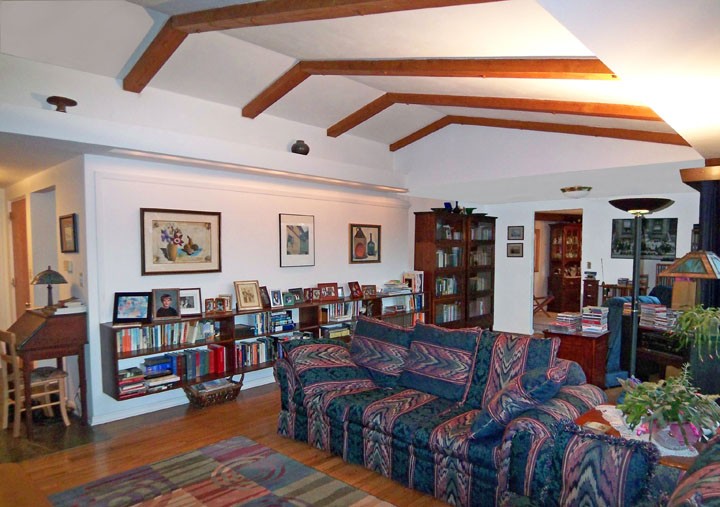 The north side of the Living Room features a wall-hung built-in bookcase. The main entry is to the left. The space above the bookcase was designed for Jean to display her paintings. 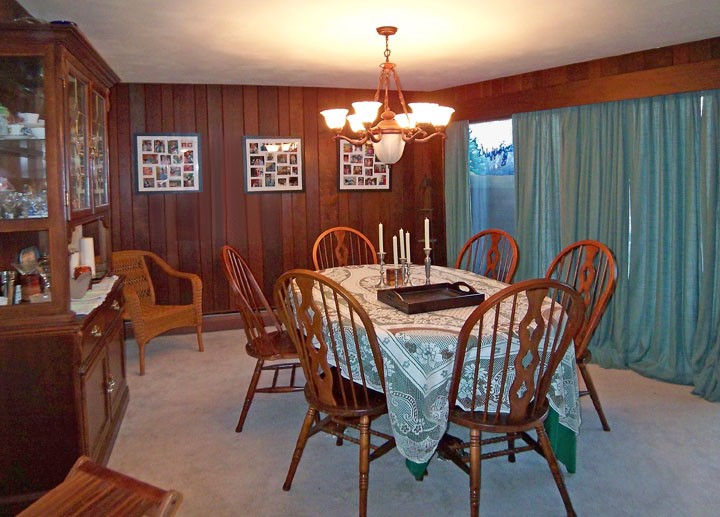 The house features a spacious formal dining room. A deck is beyond. 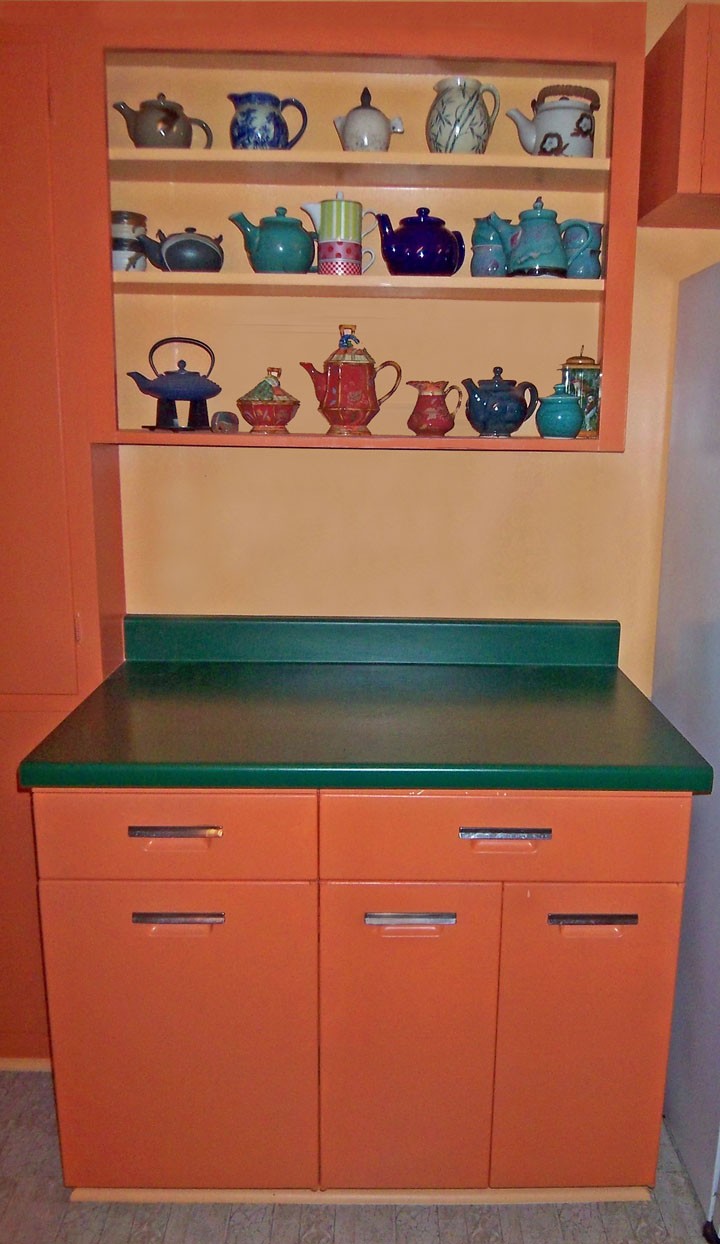 This kitchen built-in cabinet and shelves are original to the house. As might be expected, there is a quite large, walnut-paneled office/study with a wall of bookcases for the master of the house. The room has its own entryway from the outside rear yard. 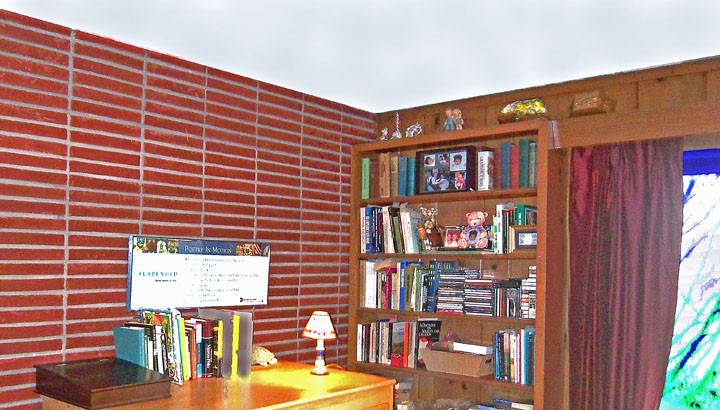 A second study/den is behind the living room fireplace. Now the brick is stacked vertically and exposed. Built-in walnut bookcases flank a picture window facing the mountains. 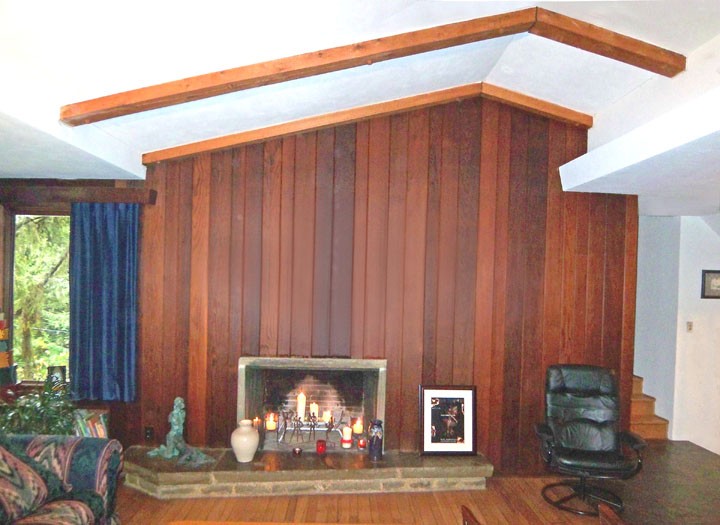 Rather than the usual masonry, Heidrich faced the fireplace wall with a rich walnut paneling. 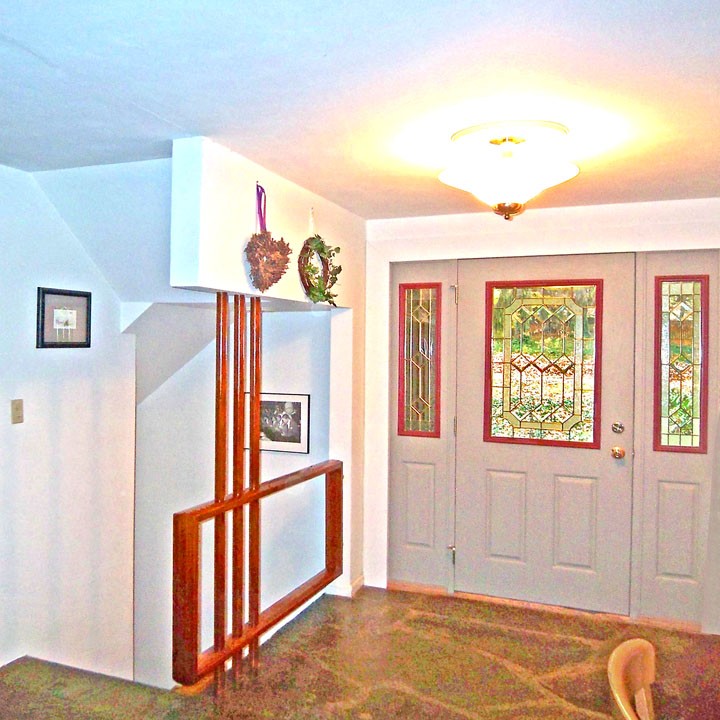 The railing for the stairs to the lower level is elegant, but not very protective. It almost certainly would not meet today’s building codes. 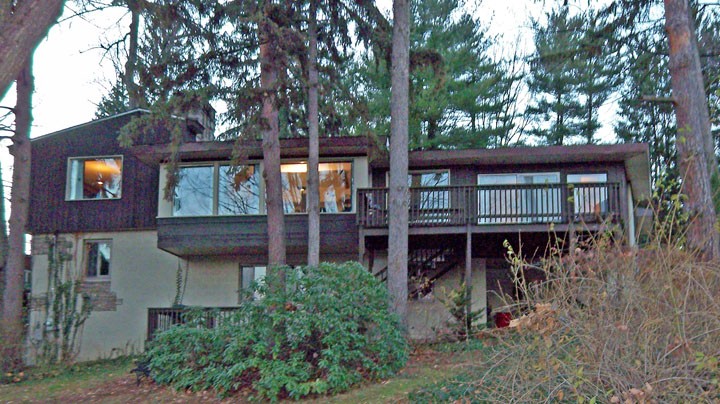 The view of the house from the rear shows the steepness of the lot which is in a natural state.