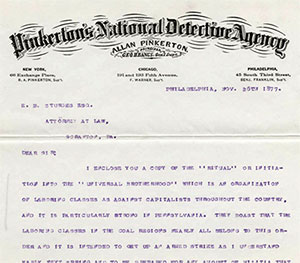 This collection consists primarily of a special report by the Pinkerton National Detective Agency from its investigation of the Scranton, Pennsylvania general strike of 1877. In response to increasing labor unrest in the post-Civil War period, several corporations in the mining, railroad, and steel industries hired the Pinkerton agency, which Allan Pinkerton had founded in 1850, to surveil, infiltrate, and undermine labor organizations and break strikes. In 1877, in the midst of a crippling national depression that saw significant wage and price deflation, railway workers initiated a nationwide strike. Laborers in several related industries, including mining, also struck in solidarity with the railroad workers, resulting in the first nationwide strike in the country’s history.

In Scranton, Pennsylvania a general strike began on July 23. On August 1, a deadly confrontation erupted between strikers, townspeople, and the Scranton militia. Sporadic violence continued into the Fall. In response, the Pinkerton Agency used paid informants to infiltrate the Molly Maguires, a secretive Irish-American labor organization, and the Ancient Order of Hiberians, an Irish-American fraternal and benevolent organization that formed in New York City in 1836 and subsequently founded chapters, or “divisions”, in other states. The Molly Maguires operated independently within the A.O.H., though the latter eventually disavowed any connection with the so-called Mollies. Business owners and Scranton’s political leaders believed these organizations led the strike efforts and were responsible for the violence. The Pinkerton investigation ultimately led to the arrest and execution by hanging of 19 Mollies. Ten of them were hanged on a single day, June 21, 1877, in Pottsville, Pennsylvania.