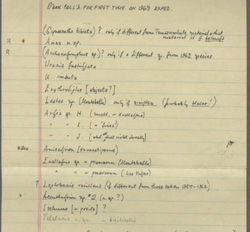 George H. & Alice F. Beatty were a part of the Penn State University community for the latter half of the 20th century. Dr. Alice F. Beatty was a zoology professor at Penn State DuBois whose research focused on the diversity of the order Odonata, which consists of dragonflies and damselflies. The couple were assistant curators at the Frost Entomological Museum at Penn State from the museum’s early days. From the 1940s-1970s, they traveled throughout the northeastern and southern United States as well as on several trips to Mexico, sampling odonates and recording their field observations in notebooks. These notebooks, spanning decades of research, contain records for the approximately 60,000 odonates that they collected.

Their collection of dragonflies, damselflies, and other insects was donated to the Frost Entomological Museum in 2005 and has been in the process of digitization since 2013. Each specimen is photographed with the collecting event data, which describe the circumstances in which it was sampled. Some specimens simply have a number associated with them, correlating with the date and location from which they were collected. The Beattys’ field notes reconcile these numbers, providing the background information for each specimen, which can enable analysis of the change in the ecological habitats in which species live.