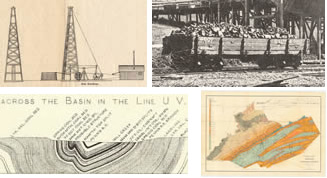 The first geological survey of Pennsylvania began in 1836 and was completed in 1858. From 1836-1841, the Survey published six annual reports. Fiscal constraints delayed the final report for over a decade. In 1858, the Survey issued a two volume report titled: The geology of Pennsylvania; a government survey: with a general view of the geology of the United States, essays on coal-formation and its fossils, and a description of the coalfields of North America and Great Britain, by Henry Darwin Rogers. 1631 p.  + 2 maps (geological and anthracite). Volume I, Volume II, and related maps are available through the Internet Archive.

Described in 1924 as “the most remarkable series of reports ever issued by any survey”, the Second Geological Survey of Pennsylvania (1874-1889) produced an unprecedented volume and quality of geologic reports. With over 80 texts, nearly 600 accompanying maps and illustrations, a hand atlas, a six-volume grand atlas, and miscellaneous other publications, the Second Survey contains a treasure trove of geologic, economic and historic information about Pennsylvania during the Golden Age. This digital project was made possible with support of the Marion and Kenneth Pollock Libraries Program Fund. The text images were created by scanning microfilmed images of the text. The text was then run through an OCR program to provide full-text searching capability. Oversized, color, and lithographed materials were scanned on-site using resources in the University Libraries' Digital Preservation Unit. All images were scanned in TIFF format then converted to either GIF or JPEG2000 formats for presentation.

The Third Geological Survey of Pennsylvania existed from 1899 to 1919 and produced approximately twenty reports. Much of the work of the Survey was performed in conjunction with the U.S. Geological Survey and resulted in topographic and geologic mapping for half the state, published by the U.S.G.S.

This survey was established in late 1919 and continues to publish materials to this day. This collection of materials from the 4th survey consists largely of geologic maps scanned as part of a test project in 1999. Maps were scanned at 300 dpi with 24-bit color matching. Many publications from the 4th Survey are available online at the Pennsylvania Geological Survey website. We also have a list of the progress reports and bulletins.

The U.S.G.S. materials in this collection consist primarily of geologic maps scanned as part of a test project in 1999. Many of the maps are now available online from the U.S.G.S. Maps from the folios of the Geologic Atlas of the United States are also available from Texas A & M's Digital Library.

These are progress reports published by the Pennsylvania Geological Survey. Progress reports include annual publications on the status of the state’s oil and gas industry from 1950 through 1991, as well as brief technical reports on economic resources and various other topics.