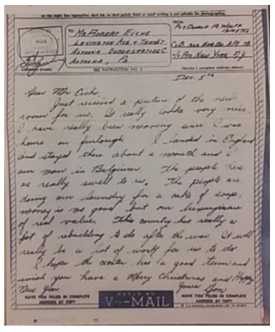 During World War II, many Penn State Altoona students and faculty joined the war effort. While these members of the college community were stationed overseas, Mr. Eiche corresponded with them via letters. Many of these veterans returned to finish their education after the war ended.

The Eiche Collection includes over 100 of these war letters as well as V-mail, which the military developed to save space in transport vehicles and airplanes. As part of the V-mail process, a censor would check each letter to make sure it did not divulge any classified information, and then a microfilm image of the letter was taken. When the microfilm arrived in the United States, the thumbnail sized images were enlarged, printed, and delivered to the recipients.

These letters and V-mail offer researchers first-hand accounts of the everyday lived experiences of local soldiers during the war.