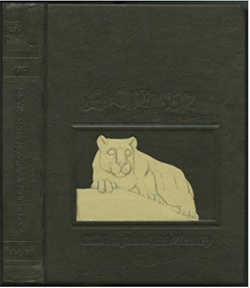 This collection consists of campus yearbooks: “La Vita” (1963-1965) which has several images of the since demolished DuBois Mansion (1978) and the construction and dedication of the Swift Memorial Building. The “Lion’s Paw” (1972-73; 1975-76; 1978-79) offers a detailed photographic narrative of the faculty, staff, and students that comprised DuBois Campus. “Lion’s Paw” yearbooks include details on local patrons that contributed to the campus’s continued development. The 1973 yearbook contains some images of the DuBois Mansion as well as a short history. The digital records provide insight into the campus history and life in the 1960s and 1970s.

The DuBois Center of The Pennsylvania State College began in four rooms at the Hubert Street grade school in 1935. The center began its first semester with four full time and one part time faculty and 42 students. The library’s collection was also modest at only 437 volumes contributed primarily from the faculty. The DuBois Center became a budding campus after four acres of land and the DuBois Mansion were donated by the heirs of the late John E. DuBois. This generosity greatly increased the capacity of the center allowing for admissions to soar to 150 by 1938. Following World War II the GI Bill enabled many veterans to pursue education at DuBois, which began offering two year associate degree programs in engineering in 1955. In 1962 the DuBois Educational Foundation campaigned to secure funds for the Swift Memorial Building. The Foundation raised $500,000 from residents and businesses of the tri-county area of Clearfield, Elk, and Jefferson counties. The construction was completed in 1964 and included spaces for labs, offices, classrooms, and computer facilities.  The Foundation continued to develop the campus adding the Donald S. Hiller Building in 1975, the Mary Smeal Building, the renovated Symmco House, and DuBois Educational Foundation Building in 2004.  Today Penn State DuBois awards nine associate and seven baccalaureate programs and is comprised of approximately 600 undergraduate students.