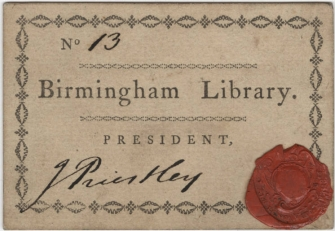 The many sides of the life of Joseph Priestley (1733-1804) and his striking legacy in many fields have fascinated historians and biographers. Priestley's considerable talents as an experimental chemist led him to make discoveries about the properties of gases that revolutionized the science. He was the first to describe the properties of oxygen and seven other common gases, the first to observe the basic process in photosynthesis, and the first to note differential gaseous diffusion; he was also the inventor of carbonated water. He identified charcoal as an excellent conductor of electricity, and one of his books, History and Present State of Electricity, described his friend Benjamin Franklin's electrical experiments in detail.

Yet Joseph Priestley was more than a scientist; he was the author of more than 150 books and pamphlets on an astonishing range of subjects. He was a theologian, a historian, a linguist, and a writer of learned tracts on education, politics, literary criticism, oratory, grammar, psychology, perspective, metaphysics, electricity, and optics. He was above all a Christian minister of the Enlightenment, and his religious dissent made him a seminal figure in the history of modern Unitarianism.

Priestley supported both the French and American revolutions and published his opinions, which made him a very unpopular figure among the ruling classes in England. He suffered severe persecution in Birmingham, culminating in the burning of his house and the destruction of his library and much of his scientific apparatus in 1791. He was made a citizen of France but declined to accept a seat in the National Assembly, and instead he moved to America in 1794.

Settling in Northumberland, Pennsylvania, Priestley continued his pursuits in science and theology during the ten years he lived in this country. He founded the First Unitarian Church of Philadelphia, and he was appointed to, but refused, a professorship in chemistry at the University of Pennsylvania. He died in Northumberland in 1804.

In 1918 George Gilbert Pond, Professor of Chemistry and Dean of the School of Natural Science at the then Pennsylvania State College, began soliciting funds for the purchase of the home of Joseph Priestley in Northumberland. The original plan was to move the building to the campus as a permanent shrine, but when it was finally purchased and turned over to the College, it was left at Northumberland. A memorial museum was built on the grounds to house the Priestley relics. The book collection assembled by Professor Pond and his associates, friends of the Priestley family, and friends of the College was housed at the Museum at Northumberland until 1936 when, by action of the Board of Trustees, it was transferred to the College Library for cataloging and permanent preservation because of the danger by floods in Northumberland.

The entire Priestley collection of books (some 450 titles), now housed in Rare Books and Manuscripts at Penn State, is arbitrarily classified under the number T540.8 and is divided into seven groups: scientific writings, religious and sociological writings, miscellaneous writings, manuscript writings, biographical and critical writings about Priestley, books associated with Priestley and his family, and photographs.

The Priestley Collection at Penn State also contains manuscripts, including Priestley's Last Will and Testament and two holograph copies of his memoirs. His own account of his life ends in 1795. The autobiography was completed by his son Joseph Priestley and published in London in 1806.

The collection was the gift of the estate of George Gilbert Pond, and purchase, 1936-1961.

Additional archival materials relating to the Joseph Priestley house, Northumberland, Pa. deeds and correspondence, 1882-1955, are in the collections of the Penn State University Archives.