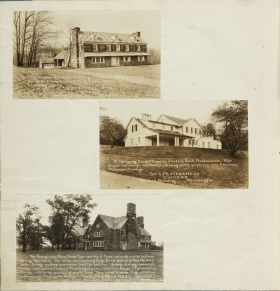 Wayne Herkness (1882-1957) entered the real estate business within a few years of his father’s untimely death in 1899.  The family lived at Cloverly Farm, a country estate on the north side of Vinegar Hill (Susquehanna Road).  In 1904 the property was divided for sub-division and the first homes on present day Sewell Lane were built. In 1905, Herkness joined with G. Henry Stetson, second son of John B. Stetson of hat fame, to form the firm of Herkness, Stetson & Company. A little later another gentleman by the last name of Cochran came into the firm, then known as Herkness, Stetson & Cochran. In the spring of 1909, Cochran left and the business was renamed Herkness & Stetson. By 1910, Wayne’s brother, J. Smylie, had left the family auction business run by their uncle, and joined the real estate concern. Around 1920, another brother Malcolm joined the business. The firm was located in the Land Title Building in Philadelphia.

Around 1923, J. Smylie left the real estate firm in order to run his wife’s family’s business, the Charles Eneu Johnson & Company, a carbon black manufacturer. The business was founded by Alice Weber Herkness’s grandfather, Charles Eneu Johnson in 1804. Her father, William E. Weber and his brother, Henry, were at one time involved with the business and later turned to real estate. Henry J. Weber purchased all of the Wanamaker properties along Valley Road as well as land from Walter Hering as early as 1911. It was this land that J. Smylie Herkness eventually purchased or inherited and which his brothers Wayne and Malcolm later developed.

Sometime during the early 1920s, Stetson withdrew from the real estate firm and Wayne reformed the business as W. & M. Herkness, although there must have been some remaining interests of Herkness & Stetson for the name remained associated with selected projects throughout the decade. W. & M. Herkness, agents, was one of the largest and most influential real estate firms in the northern Philadelphia suburbs. The business built an office in Jenkintown at the corner of Homestead Road and Cottman Avenue in 1928 (designed by Philadelphia architects Seeburger & Rabenold). While the firm maintained an address at the Packard Building in 1929, it is likely that following the onset of the Depression, the address was soon given up with all operations occurring in Jenkintown.

While the firm brokered real estate transactions throughout the Philadelphia region, they were the primary country estate realtors and developers in eastern Montgomery County. Some of the local development projects which Wayne Herkness was involved are: Hering Tract (1910), Huntingdon Farms (1910/11), Masey Estate (1911), Inverness Farms (1912), Baldwin Locomotive Essington Plant expansion (1915), Huntingdon Road (1921), Cherry Lane (1920/21), Highland Farm (1922), Duell Tract (1924), Meetinghouse Road Tract (1924), Idro Farms (1925/27), Harte Estate (1928), The Meadows (1928), Barrowdale (1929), and Lorraine (1929). The brothers were also two of the purchasers and founding members of the Melrose Country Club, which had been purchased from the Curtis Publishing Company in 1926.

The firm experienced difficulties after the onset of the Depression. In a reference dated November 1936, The Appraisal Company was listed as succeeding trustee to W. & M. Herkness, agents, with Wayne as President and Malcolm as Secretary.

Following Malcolm’s death in 1940 and after the war, Wayne took on Bill Wetherill, brother A Morris Herkness’s son-in-law. The business eventually passed to Wetherill following Wayne’s retirement in 1950. Soon thereafter, Wetherill sold the business and retired to Cape May, N.J.

These materials are provided through a partnership of Penn State University Libraries, Penn State Abington College and the Old York Road Historical Society.