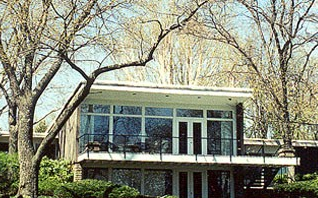 A. William Hajjar, a member of the architecture faculty at the Pennsylvania State University in the 1950s and 1960s, challenged the conservative look of the State College community with his contemporary-style homes. Now more than 50 years old, these forty-plus buildings still delight those who appreciate post-war modern design, and their owners are proud to play a part in conserving a significant part of State College history.

Not for resale. Permission is granted to make copies for personal use.