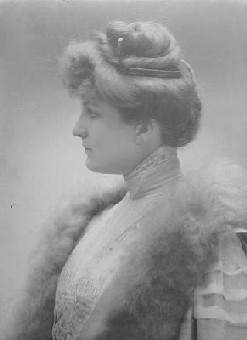 On the occasion of her seventieth birthday, Alma Mahler-Werfel, wife to composer Gustav Mahler, architect Walter Gropius, and writer Franz Werfel, was given a birthday book at her home in Pacific Palisades, California. The bound volume contains seventy-seven letters from significant representatives of European and American cultural and intellectual history. They all shared love and admiration for this glamorous woman who not only bedazzled her husbands, but everybody who came in contact with her.

She was born in 1879, the daughter of painter Emil Jakob Schindler and singer Anna Bergen. Alma grew up in Vienna, studied music from an early age, and at the age of twenty-two, married world-renowned composer and conductor Gustav Mahler. After his death in 1911, she had an affair with the expressionist painter Oskar Kokoschka, but married the Bauhaus architect Walter Gropius in 1915. A few years later she met writer Franz Werfel with whom she had to flee from Nazi Germany in 1937. They emigrated to France and then to the United States in 1940 where they settled in California. The sunshine state of the west soon became the home of many European intellectuals many of whom either had already been or became friends with Alma Mahler-Werfel.

Anne Rose König, graduate student in the Penn State Department of Germanic and Slavic Languages and Literatures, made the relationships around Alma Mahler-Werfel as portrayed in this birthday book the topic of her master's paper. Additionally, she prepared the letters for publication on this website; not only did she make available a digital image of the original letter, but she also added a transcription of the letter, a short biography, and a brief description of the relationship between the author of the letter and Alma Mahler-Werfel.

The website, in German, consists of a short introduction and presentation of the project including the technical aspects (Das Projekt), a summary of Alma Mahler-Werfel's biography (Biographisches), a bibliography (Bibliographie), and the letters themselves. They are organized alphabetically (Gratulanten A-Z) and according to different topics, such as literature or music (Gratulanten nach Themengebieten).