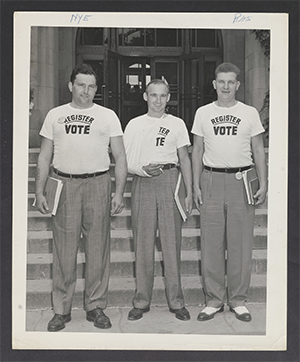 This collection contains scrapbooks collected by union organizer Harold Rasmussen. Rasmussen worked as a heater helper in the south Chicago works of Republic Steel and as president of Blue Eagle Lodge No.57 of the Amalgamated Association of Iron, Steel and Tin Workers. In 1936, Rasmussen became a staff representative of the Steel Workers Organizing Committee (SWOC) where he organized in the Midwest and the South. In July 1942, Rasmussen was assigned to District 30 of the newly formed United Steelworkers of America (USWA).  Shortly thereafter he took leave of his district office to serve in the United States Army during World War II.  In 1946, he returned to the Steelworkers and directed organizing efforts in District 30 until 1970.

Rasmussen’s scrapbooks document the strikes and labor disputes, as well as various conventions, of the Amalgamated Association of Iron, Steel and Tin Workers of North America, the Congress of Industrial Organizations (CIO), and the United Steelworkers of America from the time of his own involvement, from approximately 1933 to 1970.