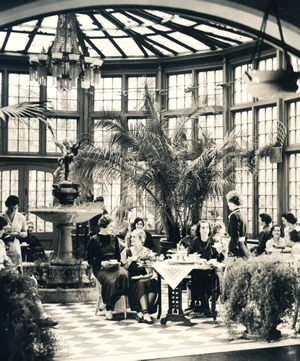 For 100 years, the elite and prestigious school known as The Ogontz School for Young Ladies was a prominent force in female private education. Three locations served the school, each for about a third of its existence.

The school had its beginnings in 1850 as The Chestnut Street Female Seminary, founded by two teachers, Miss Mary L. Bonney and Miss Harriette A. Dillaye, who had been classmates at the Troy Female Seminary, NY. The location of their "finishing school" was a stately four-story row house at 1615 Chestnut Street- surrounded by some of Philadelphia's wealthiest residences- but after several decades, the success of the school required a search for more suitable quarters "in the country."

In 1883 the school rented the Elkins Park estate of Civil War financier Jay Cooke, named “Ogontz” for Cooke’s boyhood mentor and role model—a Sandusky Indian chief. With the move, the school assumed the name of the estate and became The Ogontz School for Young Ladies. By then misses Bonney and Dillaye had selected two associate principals from the school’s faculty, Miss Frances Bennett and Miss Sylvia Eastman. At the new location the four principals shared responsibility for a brief time, with Bennett and Eastman gradually taking over entirely. Sylvia Eastman became sole principal after Bennett’s retirement in 1900. For thirty-four years the school thrived in the Jay Cooke mansion, with a student body of about a hundred privileged young girls.