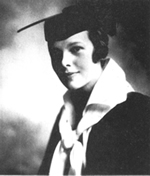 Though the names of famous families appear, and often reappear, in the list of Ogontz School alumnae (Armstrong, Campbell, Dunlap, Gillette, Heinz, Sperry, Squibb, Wrigley) only one former student became a international celebrity for her own achievements—the legendary aviatrix Amelia Earhart.

Amelia was not raised in the luxury enjoyed by most Ogontz girls. Though her maternal grandfather was a successful judge in Atchison, Kansas, where Amelia was born, her father had a checkered and botched career that kept the family on the move, and far from wealthy. After attending many schools, she graduated from Hyde Park High School in Chicago in 1916. Soon after, her mother came into some inheritance funds that offered an opportunity to send Amelia and her sister, Muriel, to private schools. With Bryn Mawr as her ultimate goal, Amelia entered The Ogontz School at the Jay Cooke estate that fall. She was 19 years old. 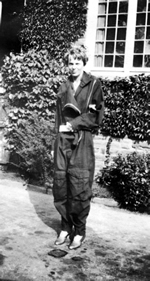 Part of a transitional class, she started her second year at the Rydal location. She would have graduated in June 1918 had she completed the year. But she never finished at Ogontz.

Amelia was a headstrong girl, firm in her beliefs and willing to stand up for them. This led her to several clashes with the equally willful headmistress, Abby Sutherland, and sometimes, with her fellow students. Most widely known was a battle over the retention of sororities. Finding them too exclusive, Amelia—who was already a member of one—sought to have more societies created so that all girls could join. Miss Sutherland’s solution was to disband them entirely. Amelia wound up on an Honor Board, created in part to prevent the sorority girls from disobeying the rules and meeting in secret.

Obviously a natural leader, Amelia was voted class vice-president as a senior. She also was secretary of the Ogontz Red Cross chapter—a group that knitted sweaters for the allied troops in World War I—and secretary/treasurer to a group called Christian Endeavor.

The senior class at Ogontz traditionally donned their graduation caps and gowns at Halloween, a night when class motto, class song, class sponsor, and honorary member were revealed. Also, photos in cap and gown were taken that day. Hence, a photo of Amelia wearing her cap and gown exists, even though she never graduated. At Christmastime 1917, she visited her sister who was at school in Toronto, Canada, and was moved by the sight of soldiers who had become amputees. She returned to Ogontz in January, but stayed only a few weeks. She had decided to become a nurses’ aide in the Voluntary Aid Detachment at a Toronto hospital.

Years later, after she had become famous as the first woman to fly across the Atlantic (the Friendship flight, in which she was actually a passenger), Lady Lindey was asked back to Ogontz to review the battalion at the end-of-year drill competition. The 39 girls in the winning company would forever be able to say that their medals were pinned on by Amelia Earhart. She returned a few more times in subsequent years to give presentations to the student body on her aviation exploits. Amelia was named honorary member of the Class of 1930, and her photograph appeared in an Ogontz yearbook, at last.

OTHER ALUMNAE OF NOTE

With the passing of time, the numbers of Ogontz girls who entered professions increased. Fifty-one percent of the post-Victorian alumnae continued their education at institutions of higher learning. Many had careers in medicine, law, the arts, business, and banking. Mentioned here are just a few of the most notable.

• Eleanor Massey (Bridges) won distinction as an artist—portraits and murals—and taught in the art department at Vassar College.

• Queena Mario (nee Queena Tillotson) was a leading lyric soprano for the Metropolitan Opera Company and the San Francisco Opera Company in the 1920s. Her sister, Rose Tillotson, became assistant editor for the magazine, McClures.

• Evelyn Duerler had a career as a popular singer in films and light opera under the stage name of Evelyn Case.

• Frances White Dhiel was president of the International Council of Women in New York, and Director of Reception for the U.S. Department of State in San Franciso.

• Betty Huyler (Gillies), Winnabelle Coffe (Pierce) and Cornelia Fort were all ferrying pilots (supplies and equipment) during World War II. When Fort’s plane crashed in a routine flight over Texas, she became the first woman in active duty to die in that war.

Other Ogontz alumnae, too numerous to mention, became powerful activists in community affairs and charitable work.