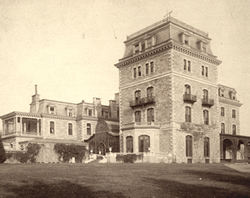 By 1883, The Chestnut Street Seminary was one of the most successful finishing schools in the country, and expansion was inevitable. Jay Cooke, Civil War financier and owner of a nationally-renowned estate in Elkins Park known as Ogontz, offered to rent his vacant five-story mansion to the principals of The Chestnut Street Seminary for the sum of $15,000 a year. Impressive ceremonies accompanied the school’s move—a day of addresses, music, and jubilation.

The mansion, with its many spacious rooms, could accommodate one hundred students. “Dignified, but not gloomy,” it came furnished in ornate Victorian style with heavy velvet carpets on the wide corridors. The large library became a classroom, and an amusement room on the top floor with a stage and seating capacity of 150 was used for lectures and plays. The Conservatory, a court with palms, rubber plants, and a sculptured fountain, was a central gathering spot. The elegance of the mansion proved impressive even to the affluent clientele. A lodge on the grounds would serve as a science laboratory, and new buildings were erected to accommodate an art studio, gymnasium, and music rooms. There also were stables, an infirmary, and greenhouses. 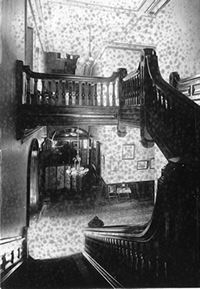 A paradise for young girls, the woods were full of ancient trees that lent themselves to the building of tree houses. There was a brook, an old mill, a pond, and a steep hill for sledding. Forty acres of the estate were well-kept lawns and flower gardens. The students spent their spare time walking, playing tennis, skating, playing ninepins (bowling) and swinging dumbbells. In the large amusement room the girls presented operettas, dramas, and minstrel shows—“men” in the productions were distinguished by their "mustaches" and the pleated black gym skirts used to cover their legs.

No girl left the premises without a chaperone—whether to shop in the city, or go to a doctor or dentist. “Young ladies may not be left alone in railway stations, shops, or restaurants,” was the edict. They could not purchase “flowers, candies, nuts, fruits, or edibles of any sort except by written permission from the School.” They could take luncheon at only Sauter’s or Blank’s, both on Chestnut Street, and they could not drink Philadelphia water. They could not post letters or send telegrams from Philadelphia, either. Ogontz had its own post office, and their communications were carefully screened. Each had a correspondence list from her parents, and Miss Eastman knew the handwriting of every boy at Harvard, Yale, or Princeton who was on the lists, and especially those who were not! Callers were permitted at 8 o’clock Monday evenings, but had to leave at the stroke of 9. The girls were not allowed to walk their intrepid gentlemen callers to the door—they said goodbye in the well-lighted hall. 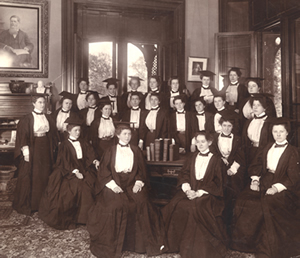 Under the careful direction of Miss Sylvia Eastman, studies were broadened and standards raised. Eastman also introduced military drill in 1888, making Ogontz the first girl’s school to adopt the practice—shocking at the time. The curious came to view the phenomenon, and gradually it became accepted, remaining one of the distinctive features in Ogontz School life until the school closed in 1950.

A decade after Jay Cooke’s death, Joseph Widener, owner of the property next door, expressed the wish to add the land to his own estate. By then, the principal was Abby A. Sutherland, a forward-looking director who saw an opportunity to expand her school with another move. Thus, she purchased 54 acres in Rydal, and after 34 happy years at the Ogontz estate, the school moved to its third and last location in 1917.