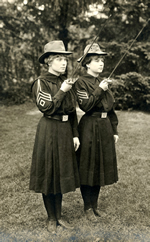 At 1615 Chestnut Street there was no gymnasium, and physical exercise meant calisthenics and walking. Indeed, the Victorian culture was suspicious of anything for girls that might seem masculine. After The Chestnut Street Seminary moved to the Ogontz Estate in suburban Elkins Park, there was plenty of opportunity and room for a variety of athletic activities from riding, to tennis, to sports in the school’s new gymnasium and on its vast fields.

However, in 1888, one of the school’s principals, Sylvia Eastman, introduced a new and startling concept—military drill for girls, complete with uniforms, officers, and faux weapons. Whether this had anything to do with Jay Cooke’s influence remains unclear, though the original belt buckles, and even the later ones, bear a striking resemblance to Civil War gear. What is known is that Ogontz was the first girls’ school to adopt this remarkable practice, though others would follow (Lasell Seminary in Auburndale, Massachusetts, for one). Certainly Ogontz is the school that would become known for it throughout the next six decades, the attire changing periodically with changing times. 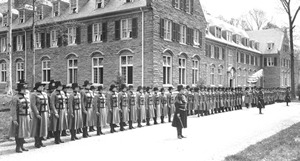 At first most people were shocked by the daring innovation, but soon it became regarded as adventurous and challenging. Eventually it would be loved and praised by most of the participants. Abby Sutherland later wrote, “As a physical training, it is universal in its influence, and unique in its appeal. No other form of exercise is at once so complete in its demands on attention, concentration, and response to standards of posture, walking, consideration of others.” Indeed, Ogontz alumnae in modern times insist they can always identify a former fellow student by her posture and gait.

But more than a physical exercise, drill was lauded for its democratic quality. Students could only advance by hard work and discipline. “All members are on the same level...” wrote Sutherland, “until by earnest, careful, bi-weekly drill, the officers of the battalion win their insignia of higher rank.” 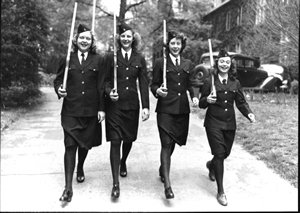 The Ogontz battalion was composed of four companies, A, B, C, and D, which competed against each other at end-of-year ceremonies that were judged by high-ranking military personnel, and sometimes by well-known political figures. Thrilling to the sound of a military band, the adjutant in command and the four company captains would march in precision to the drill field. Medals of distinction would go to a new girl and an old girl, and of course, members of the winning company. The 39 girls of company C in 1929 would forever be able to say they had their medals pinned on by former Ogontz student Amelia Earhart.

For the first thirty-odd years, General Thomas D. Landon, headmaster of Bordentown Military Academy, supervised the drilling. The title of general was an honorary one. He officially was a colonel in the National Guard. A beloved and inspiring instructor, he can be viewed, gradually aging, in hundreds of drill photos over the years. Upon his retirement, he was replaced by a series of military gentlemen, only a few of whom could successfully long endure the vigors of training nearly two-hundred young girls.

The Ogontz School became so famous for its military drill, it is rumored that Adolf Hitler, a respected new head of state at the time, wrote Abby Sutherland a letter of congratulations on her training of youth. The once-prized letter later disappeared, of course, and is now the stuff of Ogontz legend.