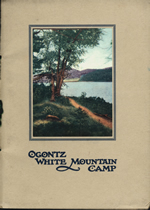 An auxiliary enterprise opened by Abby Sutherland in 1923, the Ogontz White Mountain Camp in Lisbon, New Hampshire, appears to have been a brainchild of William Furbey Brown. Miss Sutherland married Brown in 1917, reportedly after meeting him while on vacation in Colorado. Brown was rumored to be a bonefide cowboy—not very well-educated and rather rough around the edges. Perhaps he was looking for a way to become productively occupied in his wife’s business and suggested that a summer camp might be a good venture. Mrs. Sutherland-Brown investigated thoroughly, and felt “from every standpoint, the White Mountains are the most desirable spot in the East for camping.” She purchased 560 acres surrounding a lake a mile-and-a-quarter long and one mile wide.

Billy Brown’s idea or not, it certainly did keep him busy for a while as he “planned and designed” the camp’s twenty rustic spruce log cabins, several lodges, dining facilities, and a recreation hall. He even helped with the actual construction. The camp was much anticipated by the Ogontz girls when it opened for the 1923 summer season. Swimming, fishing, canoeing, hiking, riding, tennis, golf, archery, shooting, team sports, arts and crafts, bird walks—all the amenities imaginable in a camp setting—were available from the start. But this was no ordinary camp, it was Abby Sutherland’s. The lake-side pavilion boasted an ample stage for theatricals, story-telling and poetry reading; campers were periodically examined by nurses to assure their good health, and tested weekly for good posture; nature study lectures were provided; French was taught by “a native Parisian lady”; tutoring was available in virtually any college preparatory subject; and military drill was practiced as part of the camp routine. A commercially-printed magazine-yearbook called The Fagot, was produced by talented campers annually. Just as at The Ogontz School, an Honor Girl was chosen at the end of the July-August season—the best all-around girl in sports, games, and camp spirit. Miss Sutherland’s impeccable standards were also observed in the up-to-date sanitation system, screened dining and food preparation areas, and water analysis. She left nothing to chance. 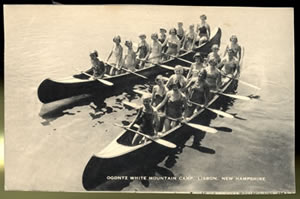 Camp councilors were selected from the faculty and graduates of the Ogontz School, and current senior girls could be “junior” councilors, in charge of the younger girls. Campers were not strictly from the Ogontz student body, though. The camp welcomed their friends and other interested girls “who will carry on the ideals and spirit of the School, upholding the honor and traditions they embody.” Just like the school, the camp catered to an exclusive and privileged clientele.

Though Miss Sutherland officiated at camp—always on hand to console the homesick—she employed someone to run the place. (Mr. Brown had passed away in 1927, only a few years into the camp’s existence.) Frances Josey, Ogontz Class of 1918, was a councilor from the camp’s earliest days. She would become its “assistant director” a few years later, running the camp for more than three decades—long after the closing of Ogontz School, and even after Miss Sutherland’s death in 1961 when the camp was passed to Dr. Donald Sutherland, her nephew. It continued to thrive well into the 1960s. 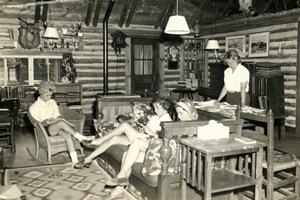 When Miss Josey died in the mid-sixties, Ogontz alumna Barbara Barrand ran the camp one season for Donald Sutherland. Then it was purchased by yet another Ogontz graduate, Bette Huber. She kept the camp operational for quite a while, but eventually it ceased to function as a girls’ camp. However, since the late 1960s Christ Church Choir from Providence, Rhode Island, had rented the property for one week each year, for its summer music camp program. In 1993, music camp organizers George and Lynn Kent purchased the property, and it is again a flourishing campsite filled with performing musical groups and guests from Memorial Day through Labor Day. In the past few years, the Ogontz White Mountain Camp has added nostalgic reunions for its many decades of camp alumnae.