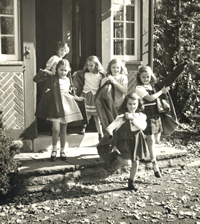 When Abby A. Sutherland moved the Ogontz School to Rydal in 1917, one of her goals was to separate the younger girls from the older ones. Taking the name of the new location, she soon established a primary division, which she called The Rydal School. For the first few years The Rydal School was located on an adjoining estate called Shangarry. Whether Miss Sutherland had purchased Shangarry or was just renting it is unknown. However Shangarry field was used for drill and other outdoor activities by all Ogontz students in the early years after the move. Documentation confirms Shangarry mansion was definitely used for primary classes until 1923, when a Rydal School building was constructed by Horace Trumbauer’s architectural firm on the campus grounds. Soon after that, a second building, called Rydal Hall, was built right next door to house elementary school boarders and provide a play space for nursery school and kindergarten day students.

Though under Miss Sutherland’s watchful directorship, The Rydal School had its own principal and faculty. Classes were extremely small and offered all of the same subjects as the public elementary schools with much greater individual attention. Music classes in piano and violin were included for those who wished to participate, and the regular school routine included group singing, dancing, drawing and painting, French, sewing, and cooking. 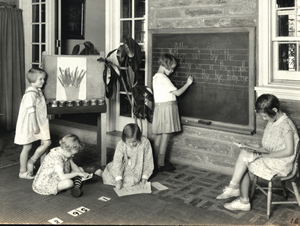 Other amenities offered at the high-tuition private elementary school were considerable. The school’s proximity to The Ogontz School (they really shared the same grounds) meant that the children could swim in the Ogontz pool, play in the athletic fields, ride horses on the property, attend suitable lectures and entertainments with the older girls, participate in school-wide May Day ceremonies, and occasionally even enjoy small group excursions to museums and youth concerts in Philadelphia. The elementary school children were initiated into military drill wearing pleated skirts and middy-blouses, and when they entered the eighth grade, they drilled with the Ogontz Battalion. 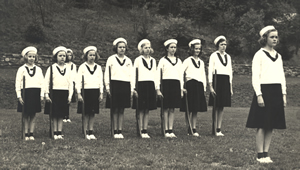 It was a happy place for most of the children, and many continued through high school, and eventually entered Ogontz Junior College.

The Rydal School closed in 1950 when Ogontz became Penn State. In the final years, to much amazement, Miss Sutherland had permitted a handful of little boys to be added to the ranks of the nursery school/kindergarten, proving that, once again, change had become inevitable.