As at any institution of learning, The Ogontz School provided a variety of activities to supplement the academic schedule. Excursions to Philadelphia for concerts, plays, and operas were regularly conducted, even for the younger children. There also were trips to nearby historic sites—Valley Forge, Gettysburg, Annapolis, and occasionally to New York. The Junior College girls looked forward to annual ski trips to Lake Placid and weekends in Atlantic City.

Bi-weekly entertainments were held on campus as well, usually featuring prominent figures of the day in the various arts. Poet Carl Sandburg was a repeat visitor, and Vachel Lindsey, William Butler Yeats, Hopkinson Smith, and Maurice Evans were among those who appeared at the school.

In the early days at the Jay Cooke estate there were several sororities (or secret societies) that recruited the most popular girls, but these were abolished as undemocratic in 1917. About that time a student government council was established. From 1884 until the school closed, those with a literary or business bent could work on the board of The Mosaic, the school’s periodical magazine. There was a Glee Club of course, and a Kin Club for those whose mothers, sisters, cousins, aunts, and sometimes even grandmothers had attended the school. (At one point 55 percent of the student body belonged to the Kin Club.) All students were official members of the Christian Association. During the two World Wars there were Ogontz Red Cross chapters. 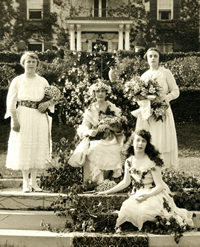 But it is student participation in dramatics and athletics that recurs throughout the century of Ogontz photographs, along with an annual event of note—the school’s opulent May Day celebrations.

Once a pagan rite from Europe that welcomed the fecundity of spring, May Day was brought to this continent with the Pilgrims. It continued to be observed as a secular joyous occasion for several centuries. Though even public schools celebrated May Day with music and dance, at The Ogontz School it was a truly major event. Weeks of preparation went into the creation of May Day posters and costumes, rehearsals of dances, and selection of the May Queen and her attendants. The events of the day itself were presented to a crowd of family and friends. 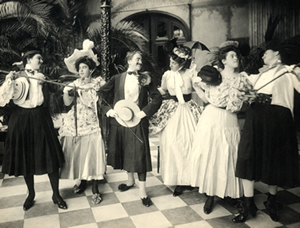 Following the move to Jay Cooke’s Ogontz mansion, with its large amusement room/auditorium and elegant conservatory, the opportunities for various theatrical presentations became abundant. Early copies of The Mosaic cite an endless stream of musicales, recitals, and recitations. Shakespeare Night—and Browning, Burns, and Wordsworth Nights, to name a few—featured elaborately costumed tableaux of the authors’ works. German and French nights included songs and plays in the foreign tongue. Pantomimes, dramas in English, and even operettas were performed by students as well, with male characters identified by their gym skirts and tights, as no young lady of the time would don trousers, even as a costume. 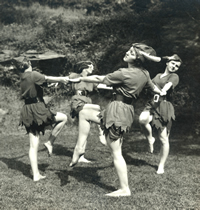 Halloween was always a huge entertainment event at The Ogontz School—the night when seniors were first presented in cap and gown and the rest of the students got to wear costumes. Full mock weddings and regal coronations were played out during the festivities.

Poirots, gypsies, Indians, cowboys, shepherdesses, black-faced mammies with babies, and even animals are seen in the many photographs posed in the conservatory under the title “Minstrels,” offering permanent records of the many opportunities for dress-up and drama. After the turn of the century, the much-anticipated senior variety shows were still being referred to as minstrels. 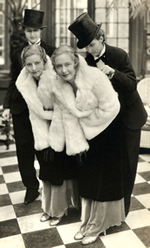 Once the school moved to Rydal, the junior girls (meaning the younger ones, not necessarily the junior class) added their own annual plays. A natural rocky nook on the new campus was named the Junior Circle, and spring theatricals could be performed outside. There, Jeanne D’Arc and A Midsummer Nights Dream came to life.

The new school at Rydal had a fine auditorium, though. Large enough to seat the entire student body at once, it boasted a proper stage with dressing areas. Then there was the log cabin, a recreation center also known as the play house, where skits could be performed. Most of the theatrical photographs appear to be taken in the palm court, however. Some feature chic tap dancers reminiscent of Busby Berkeley and fur-wrapped debutantes with top-hatted escorts—now permitted to wear long pants. Of course, the styles kept changing with the times.

The school calendar for 1947-48 reflects the ongoing popularity of theatricals. It lists three Dramatic Club performances, an undergraduate review, a high school play, a high school junior play, and a junior college senior play. And this doesn’t include performances by the Rydal School children, who were encouraged to participate in dramatics as well. 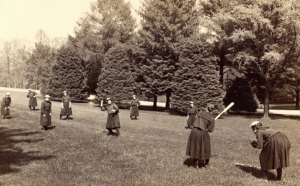 The importance of “physical culture” was always an integral part of the school’s philosophy, from walking and calisthenics at The Chestnut Street Seminary, to the initiation of military drill in 1888, when the fields at the Ogontz Estate provided ample space. Beyond this, girls at Jay Cooke’s Ogontz were required to take at least one hour’s exercise in the open air daily. If weather did not permit, there was a gymnasium “fitted with apparatus adapted to Dr. Sargent’s method of physical training.” Special corrective exercises were given to those whose posture did not measure up.

In addition to the requirements, however, outdoor games were encouraged. Baseball, basketball, and field hockey were popular competitive team sports, even in those early times. Lessons in riding were available, as well as limited stabling for personally-owned horses. The estate’s “ruins,” a replica of English castle ruins, were eventually converted into a swimming pool.

After the 1917 move to Rydal, athletics assumed an even greater role. The new campus had tennis courts and a large indoor pool “with violet ray purifier,” that made year-round swimming possible. The links and golf instructor of the Huntingdon Valley Country Club—adjacent to the campus in those earliest days—were at the disposal of the students at designated times. Later, after the Country Club moved, the school retained its own six-hole practice course.

Ogontz girls could ride steeds on the school grounds and surrounding country lanes, or they could hike, climb, cycle, or roller skate through them. Lessons were available for those interested in fencing, or in folk, tap, “aesthetic” or social dancing. Later, archery was added. Ice skating on “the lake” was eventually preempted by the creation of an outdoor skating rink near the play house.

In junior college days, hockey and basketball became intermural sports, and competitions with other junior colleges were scheduled. Cups were awarded on Field Day for excellence in tennis, golf, swimming, diving, badminton, horsemanship, and the various team sports. Ogontz took pride in athleticism, and was generally a pretty healthy place to be.