In addition to regular class reunions, The Ogontz School’s change of location twice in its century-long history provided ample opportunities for large, school-wide reunion events. Major ones were held on the anniversaries of the 1883 move from Chestnut Street to the Jay Cooke Estate in Elkins Park—1898, 1903, 1908, etc. One of the largest, perhaps because it included alumnae from all three locations, was the 1923 reunion which celebrated the school’s 40th year as Ogontz. At the reunion banquet, testimonials were given, or read in absentia, from graduates of The Chestnut Street Seminary’s classes of 1872, 1873, and 1880, and continued through the years to the youngest groups. A full twenty pages were devoted to this reunion in the June 1923 Mosaic, the student magazine. Ogontz girls, a loyal and enthusiastic group whose children and grandchildren attended the beloved school, really enjoyed opportunities to return throughout the school’s history.

Another milestone, of course, was the Centennial celebration in 1950, commemorating the year that The Chestnut Street Female Seminary opened its doors. But this reunion was bittersweet, as it also marked the closing of the school forever. Reunion events combined with the formal presentation of the school to The Pennsylvania State College.

For the next three decades, Ogontz alumnae occasionally met for small group reunions, but there was no Ogontz School to return to. The Rydal site was now home of Penn State Ogontz Campus.

In 1983, staff members at the Penn State campus gathered some memorabilia that had remained at the site and decided to put together a public exhibition. The collection was small—most of the materials had long since been removed to The Ogontz White Mountain Camp—but the exhibit was visited by quite a few Ogontz School alumnae who were delighted to return to the campus. This prompted talk of a real Ogontz reunion, and plans were initiated.

More than 210 Ogontz girls from all over the United States and abroad came to the reunion in June 1985. It was difficult finding alumnae, since records hadn’t been updated, but a lot of women on the ambitious reunion committee knew where a few friends were, and those knew where a few more were, and the list grew to more than 500 addresses. 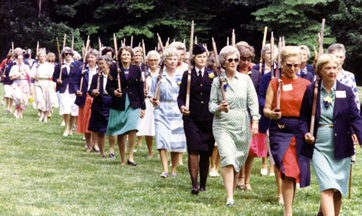 The day of the reunion was gloriously sunny, which was a good thing since the day’s agenda included military drill on the athletic field. Some of the oldest alumnae, a few from the Elkins Park days, didn’t drill, but most of the guests did—just as they had 35, 40, 50 years before. All the major television news programs in Philadelphia covered it. A formal luncheon, carriage rides with a four-in-hand team of horses, and an off-site dinner were part of the celebration, but mostly it was a time to reminisce.

Three years later a second reunion was held, with similar success. It included a few alumnae who hadn’t been found in time for the 1985 event. The last official gathering of Ogontz girls at the site of their school was the opening of The Ogontz School Archive Room in 1992. Many of the participants had contributed funds to make the room possible.