At its inception, the school at 1615 Chestnut Street offered three years—junior, middle, and senior. A few years later a graduating class was added, then a younger class as well. Essentially, the school offered secondary education to girls in their “finishing” years (age 13-17), and the goal was to prepare them for the elite society into which they had been born. As one of the principals, Miss Mary Bonney, was fond of saying, marriage was the ideal vocation for young womanhood. 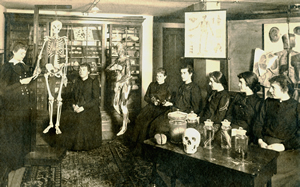 Though the curriculum expanded significantly during the Ogontz estate era, emphasis was still placed on culture and refinement “without the lash of necessity.” Studies were vigorous, with tight schedules that designated pre-assigned study periods and left little time to get into mischief. Course listings in an 1888 catalog include moral philosophy, mental science, art criticism, and the art of expression in addition to more standard subjects in the arts and sciences. The catalog notes that, “the study of history, literature, languages, and art will be conducted with especial reference to foreign travel.”

The grading system reflects expectations for young women in the late nineteenth and early twentieth centuries: E, G, and F for excellent, good, and fair respectively. That these girls would fail was unthinkable.

By the time Amelia Earhart joined the student body in 1916, she was 19-years-old, indicating that a post-high school clientele was being served. Though not officially a junior college for several years to come, Ogontz had gradually been adding this new dimension. After the move to Rydal the following year, Abby Sutherland separated “junior” and “senior” girls in a fashion that made the school more acceptable to the older student, who might have a four-year college in mind. 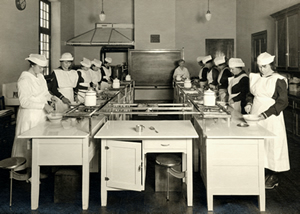 By now, mainstays of the curriculum were English literature, chemistry, French, studio arts, art history, composition, Bible, elocution, astronomy, geography, Latin, logic, German, philosophy, music, history, rhetoric, and domestic engineering—courses paralleling those at Vassar College. The domestic engineering course was taken in the home of Miss Sutherland, known as Lares, and included learning to care for an “orphaned” baby. With the assistance of a trained nurse, the girls took turns living at Lares for two-week stretches to take care of the child. Each child was supported by the girls for five years after it left, sometimes to be reunited with a grateful, impoverished mother. Cooking for a family was another domestic course. Skills to become a superior wife and mother were still preeminent. In 1922, an Ogontz alumna, Ada Pierce McCormick, offered a prize for an essay contest called “the business of being a woman.” The topic was becoming a popular one at women’s colleges in general. In the ’20s, an elective course on “the art of living” was offered, delving into the concepts of work, children, money, sorrow, housing, and the problems of the unmarried. 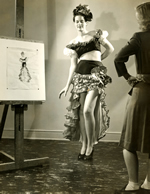 By 1938, the school officially adopted status as a junior college. (An elementary division, called The Rydal School, was already in operation, making it possible for a girl to go from kindergarten through junior college on the same campus.) Many students graduated from four years of high school at Ogontz, then went right on for the next two years. The high school offered a college preparatory track for those who planned to enter Bryn Mawr, Vassar, or some other college or university. Staying at Ogontz for junior college did not require entering the college prep track.

Though there had always been a few graduates who went on to college and/or careers, the concept of entering the marketplace did not greatly influence the curriculum until the school’s final decades when the popular emergence of the working woman caused secretarial courses to be added. The closed circle of the privileged schoolgirl was opening to new freedoms, and principles about the role of women that the school was founded upon were disappearing or changing. The closing of the school in 1950 echoed the end of an era.