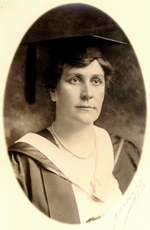 The driving force behind The Ogontz School for its last four decades was the beloved, occasionally feared, and always-formidable Abby A. Sutherland.

At first intimidated by the wealthy student body, she was immediately put in charge of twenty girls, and soon learned to cope with responsibilities of chaperonage. Impressed by Miss Sylvia Eastman’s character and educational ambitions, she decided this was the kind of teaching she wanted to do. The school also afforded opportunities for self-improvement, including practice in speaking French and German with native teachers, chances to attend programs by nationally-known lecturers, and recommended or required foreign travel.

In 1909 Miss Eastman offered to make Sutherland understudy in management of the school. To complete the bargain, Sutherland bought Eastman’s invested rights to ownership of the school by paying $5,000 a year for four years. At the end of that time Sutherland took over the school and remained its principal and owner until it closed in 1950.

It was Abby Sutherland’s vision that led the school to new quarters in 1917. After purchasing land in Abington Township, she built a new campus and moved a reluctant student body to the school’s last site. No longer a traditional “finishing school,” she added an elementary department ( The Rydal School) and separated the older girls into high school and junior college.

In 1917 she unpredictably married a cowboy from Colorado whom she had met on vacation, William Furbey Brown. With his assistance, she added a summer camp in New Hampshire— The Ogontz White Mountain Camp—to her educational empire. Mr. Brown passed away in 1927, but the camp continued to operate, even after the school had closed. 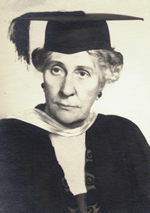 Abby Sutherland became well known in cultural circles, enabling her to bring some of the best writers, poets, musicians, and artists of the time to visit The Ogontz School and lecture or perform there. Carl Sandburg and Angela Morgan were among her personal friends. Under her direction the school blossomed and thrived.

By 1950, times had changed. Miss Sutherland was approaching 80, and there was not much demand for a school that emphasized the social graces. Additionally, the county was questioning the school’s non-profit status and demanding back taxes. It was time to end the 100-year reign of The Ogontz School. After the end of the spring semester, Miss Sutherland held a centennial celebration and formally donated the school to The Pennsylvania State College (later The Pennsylvania State University). Penn State agreed to allow her to live on the premises for the remainder of her life. She even taught a few courses.

The last decade of her life was spent earning first a master’s degree, then a doctorate from The University of Pennsylvania. Though Temple University had awarded her an honorary doctorate decades before, this one she earned at the age of 86. In 1958 she was presented with a Penn State Medal “to recognize and honor achievements of persons who have made an outstanding contribution to higher education in Pennsylvania.” Miss Sutherland died in 1961 at the age of 90.