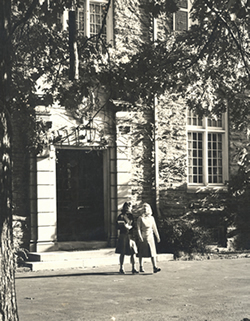 With expansion in mind, Abby A. Sutherland, the owner and principal of The Ogontz School, purchased 54 acres of land belonging to the Herring estate in “the rolling hills of Rydal” in 1916. She hired the famed Philadelphia architect Horace Trumbauer to create a large main building in the style of an English Manor House. Using Trumbauer would elevate the prestige of the new campus and Trumbauer’s reputation as well. Several smaller buildings already on the property allowed Miss Sutherland to separate the older and younger girls. A section of the land was located on the north side of Woodland Road. It is unclear whether she owned, or just rented, the original mansion —Shangarry —but the lovely old building for a time housed the elementary division called The Rydal School, at least through 1922. Many photos show both older and younger girls on Shangarry’s vast lawns for May Day exercises and drill.

The transition from the beloved old school in Elkins Park was difficult for the students, and alumnae as well, but the demand for modern schoolrooms, gymnasium, swimming pool, and heating system, was compelling. Miss Sutherland encouraged the girls to assist in the transfer of memories and traditions, and graduates of the Class of 1916 visited often and participated in groundbreaking ceremonies. Soon the “new school” would win everyone over, as daughters of the old girls flocked to join its ranks. (Sisters, cousins and granddaughters came as well. A Kin Club was eventually formed for those who were close relatives of Ogontz graduates. By the time the school was closed in 1950, fifty-five percent of the student body was in the club.) 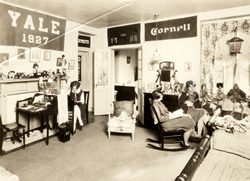 In the fall of 1917, the students moved into the welcoming new main building, used both for classes and as a dormitory for all but the seniors and elementary girls. Created from gray stone quarried on the premises, it boasted fireproof construction and the most modern lighting and appliances. Every dormitory room was spacious and had an adjoining bath. From the “old Ogontz” was brought the oak boards and banisters of the main staircase. A palm court that the architect copied from the original Conservatory was filled with flowers year round from greenhouses on the grounds, and featured an Austrian cut-glass chandelier, also brought from the old school. One other item made the trip as well—a bronze relief of Chief Ogontz placed over the fireplace in the spacious living room.

Miss Sutherland married William Furbey Brown that same year, and possibly at his suggestion, plans were made to add a summer camp to the growing holdings. Land was purchased in Lisbon, New Hampshire to house The Ogontz White Mountain Camp. Mr. Brown started building wooden cabins while Mrs. Sutherland-Brown ran the school in Pennsylvania. What a modern concept to hyphenate her name! Soon after “Billy” died in 1927, she went back to Miss Sutherland —at least professionally.

By 1923, several new buildings were added to the Ogontz School: a residence for the school principal that she named Lares for Roman demigods who guard the hearth and home, a new Rydal Schoolhouse, and then Rydal Hall—a dormitory for the elementary school children. Mr. Brown built a log cabin on the grounds, which was used as a play house, snack area, and general gathering spot. A couple of existing buildings rounded out the physical plant: a former private residence became Senior House, an original summer kitchen from the Herring estate was used for science laboratories, a caretaker’s cottage became servant’s quarters, along with the aforementioned greenhouses. Later, a few more adjoining private residences would be acquired to supplement the student housing. In 1929, a large addition would be made to the main building. 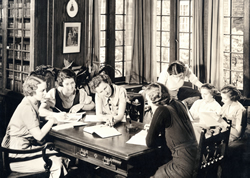 A popular and charming feature of the lush campus was “the lake”—a pond fed by the stream that cooled the summer kitchen. A series of swan pairs, cleverly named Mr. and Mrs. Drinkwater, were permanent residents over the years. Photos of canoeing in warm weather, ice skating in cold, show the lake’s popularity. Later a proper ice skating rink was created next to the log cabin recreation area.

Eventually, the school achieved a charter to officially become a junior college. In 1938 the list of graduates becomes separate for high school and junior college. It was now possible to begin kindergarten, go through elementary and high schools, and take two years of college—all at the same location. And of course, one could summer at the camp as well. A surprising number of girls did just that.

It was with great sadness that Ogontz girls—present and past—learned that their school was to cease operation in 1950. The closing marked the end of an era. Miss Sutherland chose to donate the campus and facilities to Penn State as an outright gift. At the presentation ceremonies, she issued a challenge: “Young people of Penn State, Ogontz Center, the devotion of a century of zealous effort, we pass on to you. Care for this place! Love it! Guard here the spirit of the best in your dreams of education!”