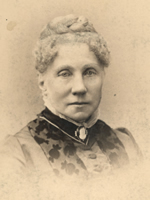 Described as “pleasantly rotund and merry,” the motherly Miss Bonney was known for her quick sympathy and kind heart. Her chief talent as an educator was her patience in dealing with less promising pupils who needed extra attention.

Miss Bonney had significant outside interests. She played an important role in organizing the Women’s Union Missionary Society, training men for the Christian ministry. She also was concerned with correcting the social injustices to Native Americans, and helped form the National Indian Association, representing the society with a petition for reform at the White House in 1880.

Though she retired soon after the school’s move to the Ogontz estate (1883), she remained very active in her causes. In 1888, while a delegate to the World’s Missionary Convention in London, she met and married another delegate, Dr. Thomas Rambaut, a minister. When he died three years later, she told a friend, “They were the best years of my life.” 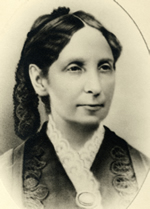 A Philadelphia Quaker, Miss Dillaye was the embodiment of a gentlewoman, known for her dignity, elegance, and refinement. Sensitive, and rather shy by nature, her quiet strength and high principles were an example to the student body and faculty alike. Once a year she would address the entire school, “Young ladies, aim at the moon, and you will hit the church steeple, but if you aim at the church steeple, you will hit the ground.”

The Misses Bonney and Dillaye met as students, and later teachers, at the renowned Troy Female Seminary, NY. Since the women complemented each other in style, the Dillaye-Bonney partnership was happy and successful. After their school was moved to the Jay Cooke estate, the associate principals—Miss Frances Bennett and Miss Sylvania Eastman—pretty much took over, but Miss Dillaye continued to be involved until her death in 1897. 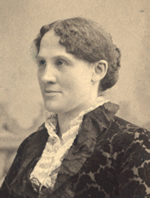 Arriving at The Chestnut Street Seminary as a teacher in 1860, Miss Bennett soon proved herself “a giant in intellect.” Her eloquence and her fascinating classes in history and English were her trademarks. She assumed co-direction of the school after its move to the Ogontz estate in 1883, continuing that role until ill health precipitated her retirement in 1900. She died in 1906, beloved and revered by more than four decades of students.

The most scholarly of the principals, Miss Bennett was continually educating herself, taking advantage of all the city of Philadelphia had to offer. She took private lessons in German language and literature, in music, and in English literature. She spent two years in Europe, became a noted Coleridge scholar, and was the first president of the Philadelphia Browning Society. She also was a founding member of the American Academy of Political and Social Sciences. After her death, her students endowed a scholarship in her honor at The University of Pennsylvania. 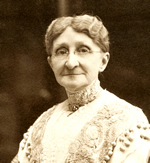 Miss Eastman became a teacher at the age of sixteen in a district near Buffalo, New York, and joined the faculty of The Chestnut Street Seminary in 1877. Though she had a facility for mathematics, art, history, and astronomy were her great loves and she taught them with care, often hours after class, until the poorest student understood.

One of four principals when the school moved in 1883, she assumed full control of the school by 1900 after the death or retirement of the other three. As principal, she was known for her moral integrity and devotion to duty, which called for the best in effort from members of the teaching staff. Students found her sometimes stern, but always just. From all Ogontz girls she demanded good penmanship, neatness, and order.

In 1909, Miss Eastman chose her successor and began training Abby Sutherland to take over the school in four years. Soon after the exchange of duties was complete, she passed away in 1913.