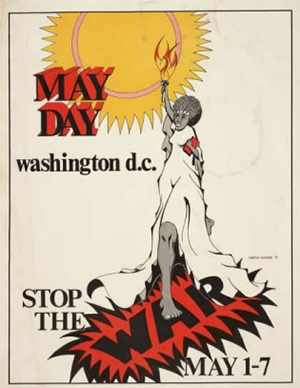 The Thomas W. Benson Political Protest Digital Collection is a unique educational and scholarly resource documenting and exploring themes associated with the student anti-war movement and campus unrest in America during the late 1960s and early 1970s. Consisting of 75 iconic political protest posters and accompanying memorabilia—the core produced by student activists affiliated with the University of California (UC)-Berkeley’s Political Poster Workshop—the collection was assembled by Professor Thomas W. Benson, Edwin Erle Sparks Professor of Rhetoric, Department of Communication Arts and Sciences, The Pennsylvania State University during his early years as a faculty member affiliated with UC-Berkeley and the State University of New York at Buffalo.

The visually compelling agitprop posters aided in mobilizing faculty and student  participation in campus demonstrations and sit-ins in opposition to the Vietnam War and the military-industrial complex.   As an eyewitness to the events of that tumultuous era and later a nationally recognized scholar in the field of communications theory and political rhetoric, Professor Benson occupies a unique vantage point to assay the organic relationship of the posters to mass movement political action.  His included oral history interview and scholarly paper presentation on the subject of polemical poster artwork of the late 1960s and early 1970s richly contextualize the digital collection.

This digital gallery is organized and arranged by thematic series and preserves for posterity the rare and fragile political graphic artwork that shaped the social, political, and cultural discourse of the Vietnam War era.  The digitized political protest posters serve as an important vehicle to generate classroom discussion and educational projects devoted to the study of the American anti-war movement and the counterculture.  Moreover, the Thomas W. Benson Political Protest Digital Collection is interdisciplinary in nature and can be used by researchers in a number of academic fields—political  science, history, sociology, communications and rhetorical theory, art education and history—to facilitate research and scholarship on the history the New Left and the role of political graphic art as visual rhetoric.