The James B. Smith House II

The Smith Letter
-- In 2008, James B. Smith wrote a brief letter detailing his experiences working with Heidrich on the design of this house as well as his experience working on the construction of two other Heidrich houses, the Osborn House and Cannon House Addition.

Even in early Spring foliage tends to hide the James B. Smith House II from the street. That the street is named Smithfield is no coincidence. The general area was the Smithfield Hills development. Jim’s dad, builder H. O. Smith, had acquired the 20 acres from the Glenn farm. Jim and his brothers, Tom and Charles (Skip), continued on with the family business after their dad’s death in 1961.

An Architectural Engineering graduate of Penn State, Jim held Heidrich in high regard. Since Jim and Virginia both had strong ideas about what they wanted in a home, Ken was hired as architect to meld and arbitrate their wishes. Jim did downsize a bit (five baths were enough, but the overall scheme is still Heidrich’s. Jim did design two other homes for himself. 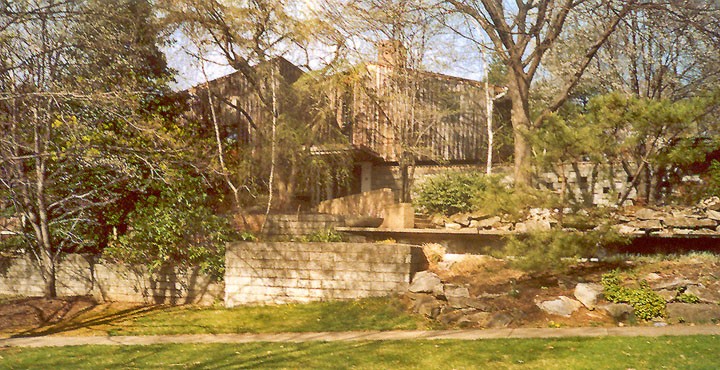 The overall theme of the home is Contemporary with a strong Mexican influence. The planter boxes (lower left quadrant), however, were inspired by the Danish Tivoli Gardens. 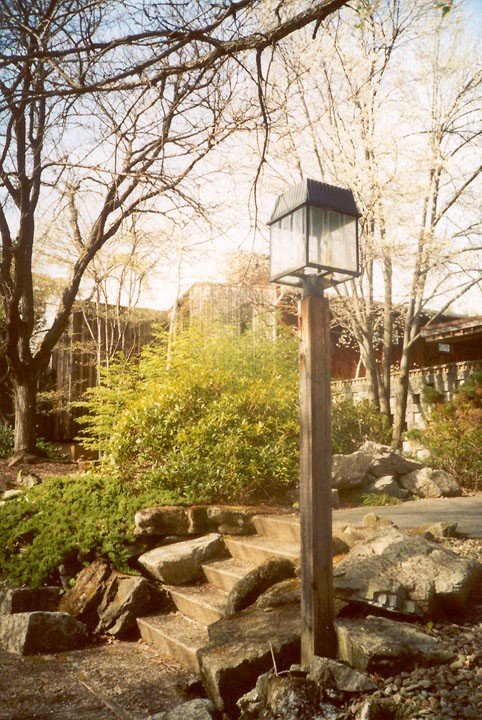 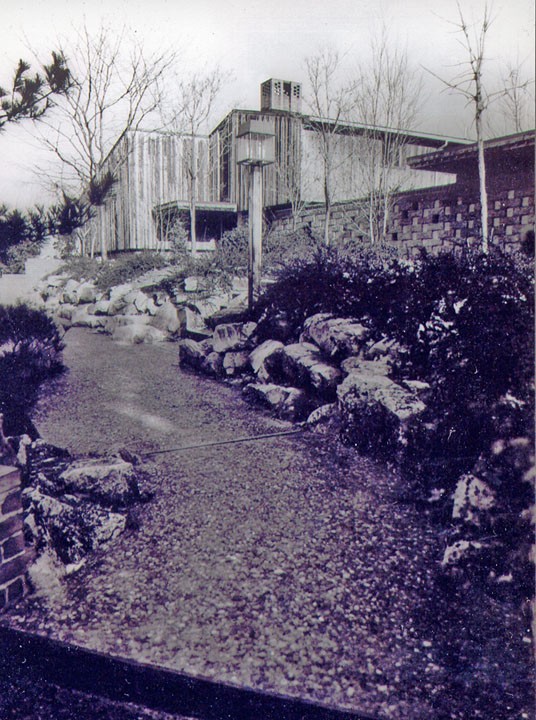 These views are further up the walk. Look carefully at the black and white photo to see the block wall behind the lamp. From left to right, the wall is first part of the house, then a courtyard, and finally a multi-car garage. 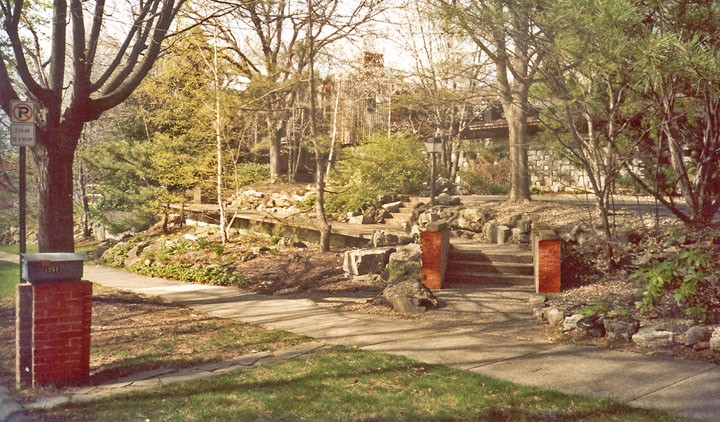 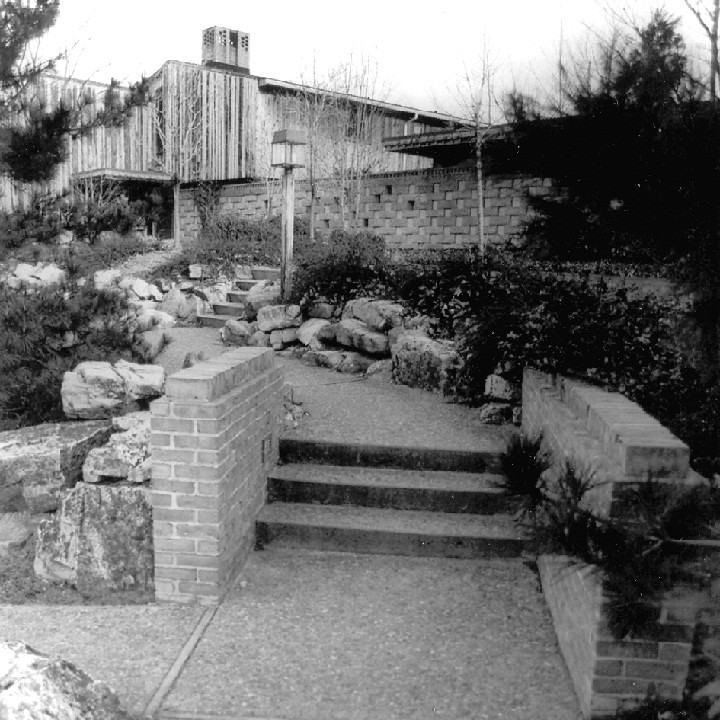 Now and then views (1970s & 2007) dramatize the impact of landscaping changes as the years go by. Notice the partially cantilevered walkway beyond the brick entry posts in the left photo. 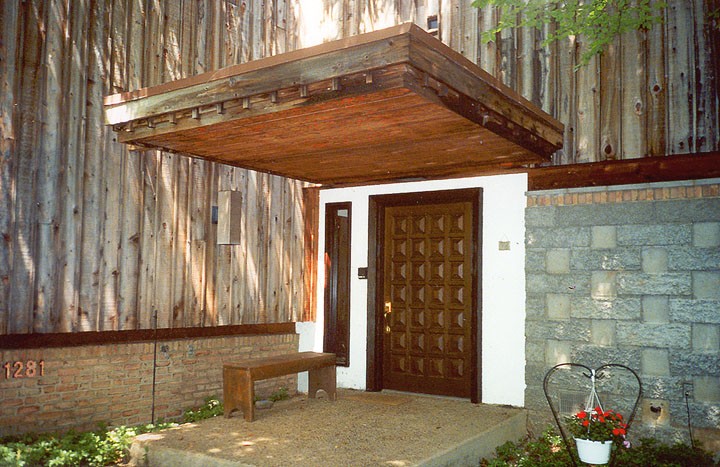 The cantilevered canopy over the entry way seemingly defies gravity. The oversized door (3.5 feet x 7 feet x 2.25 inches) must be personally experienced to appreciate its mass. The original door lockset hardware was wrought iron in keeping with Mexican workmanship. The door was hand-crafted by Enders Lumber Co. of Huntingdon. It was sandblasted on site to simulate old age and then given coats of dark stain and a flat varnish. 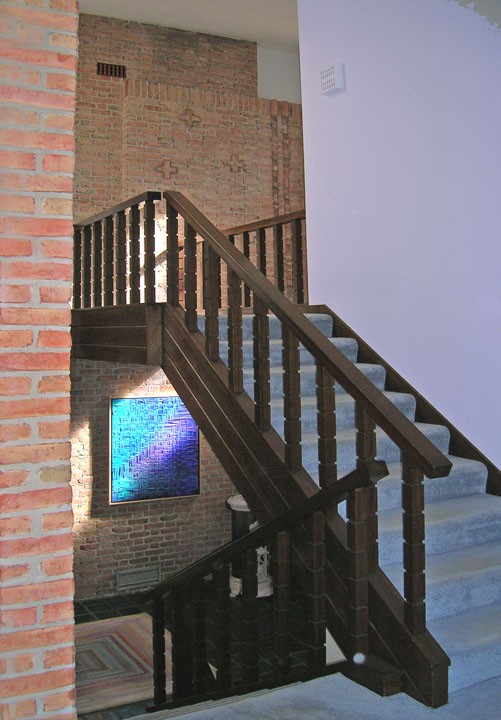 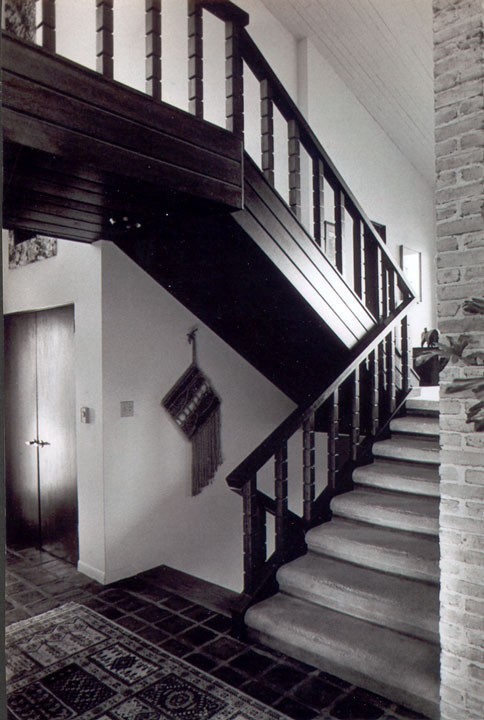 The open stairs are centered in the foyer, creating bridges for passage to the upper and lower floors. The rails of the solid mahogany staircase do not connect. The woodwork was inspired by a hotel lobby in Mexico. 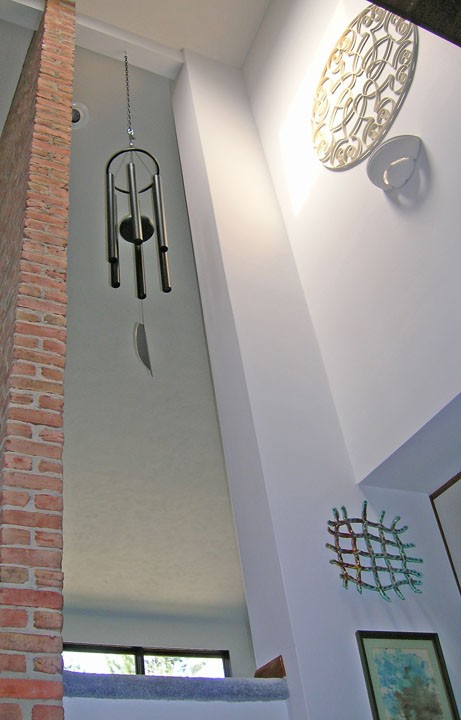 To the sides of the bridges, the space soars to cathedral-like heights, creating a dramatic highlight for the house. 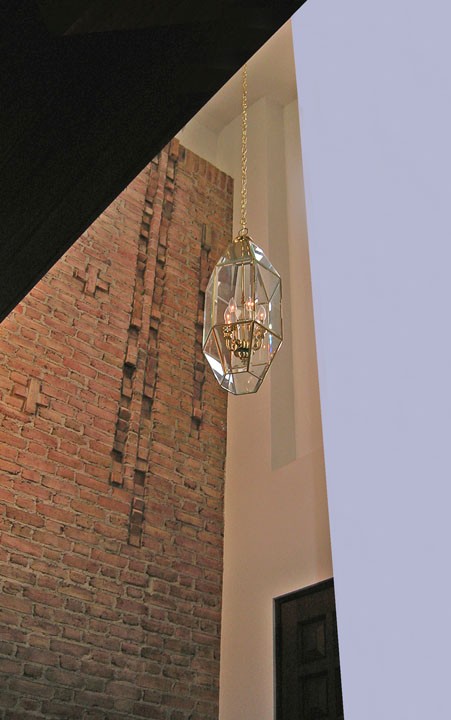 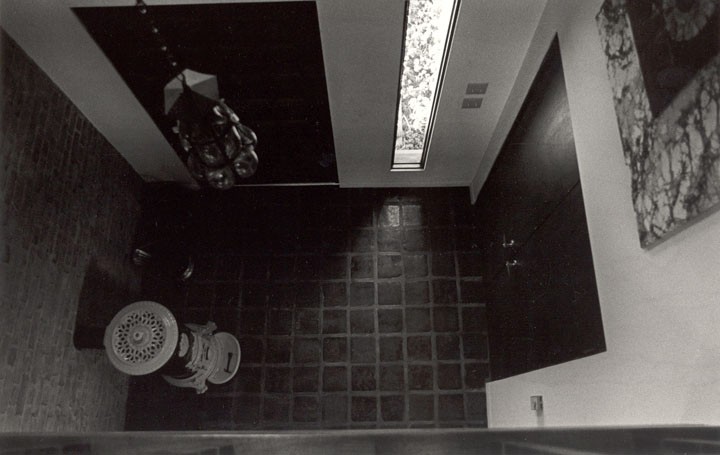 This view of the entry from the second floor “bridge” shows the Mexican light fixture original to the house. It was made of blue glass hand-blown into a wrought iron frame.

A stained glass window above the door is also Heidrich designed. The form is intended to complement the brick bas relief beside it. The window is noticeable only from the second floor. A third light fixture is now in place. 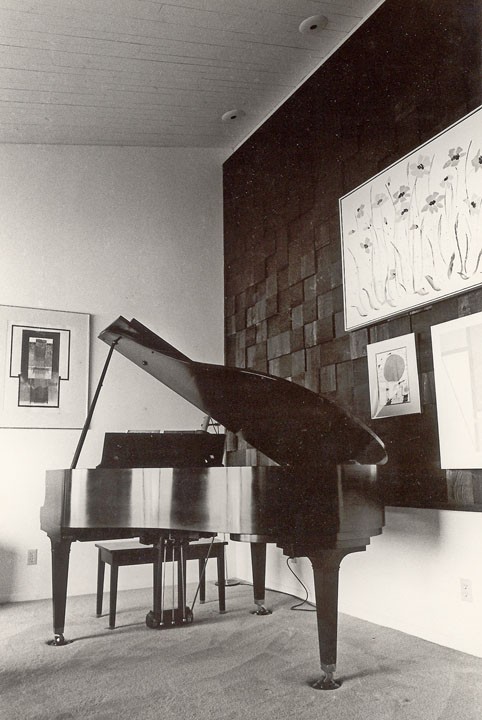 The living room has yet another Heidrich abstract bas relief sculpture. It consists of small wood blocks of random thickness, installed with the grain running in various directions. The blocks were sandblasted in place and stained to match the other woodwork (bits of sand still occasionally sift out of the crevices). Large pictures were mounted on it. 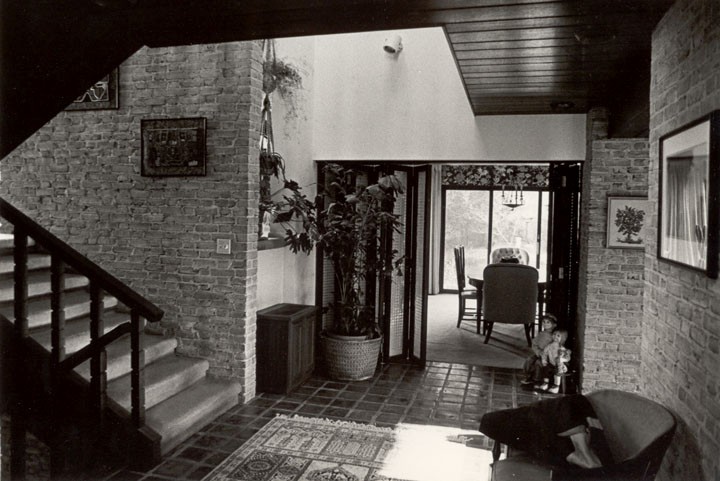 The dining room is immediately beyond the foyer and could be closed off by a folding screen. Sliding doors exit to the garden beyond. The double-tiered Mexican macramé plant hanger has been replaced by a large wind chime. 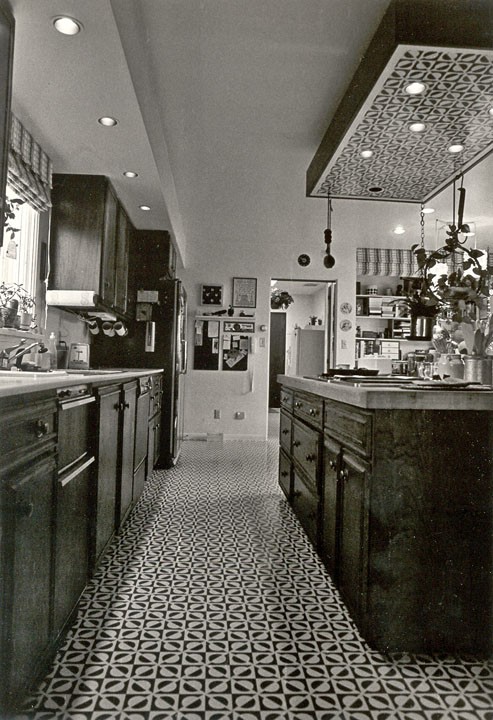 The focus of the kitchen was a large suspended light fixture designed by Heidrich. He inserted canister lights in a frame using the premium vinyl tile of the flooring. Coincidently, the pattern abstracts the player’s basket for the Spanish-Mexican game of Jai-Alai. Appropriately, the name means “merry festival” in the Basque language 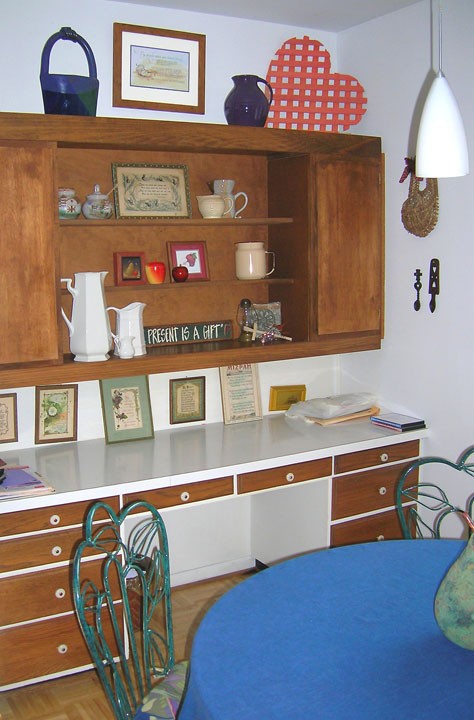 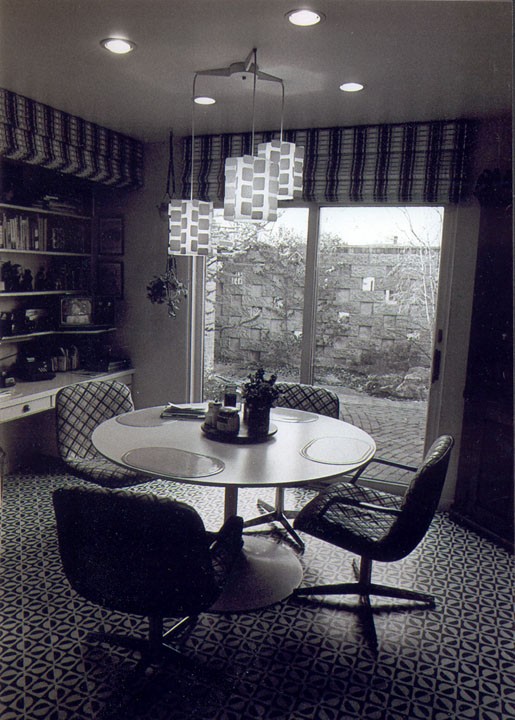 The area shares a courtyard view with the adjoining family room. The original hanging light fixture was a Danish design. 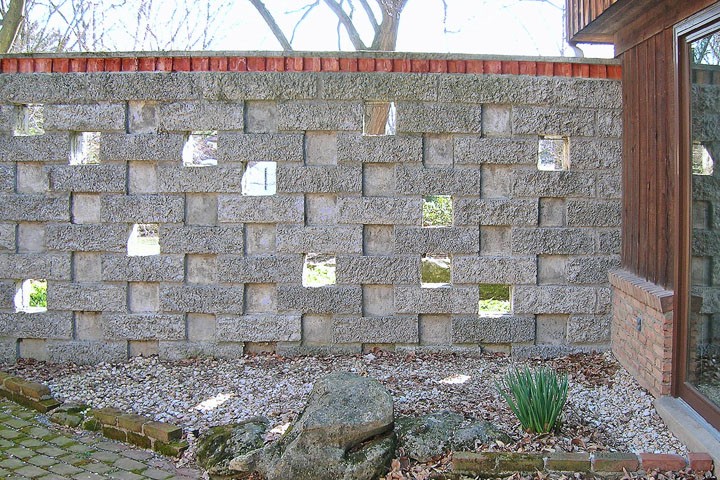 The courtyard wall is made of hand cast cement blocks. The mold for the blocks was designed by Jim so that no two block surfaces were exactly alike. The wall pattern was specified by Heidrich, providing yet another original art work. The brick teeth capping the wall are another Mexican influence. 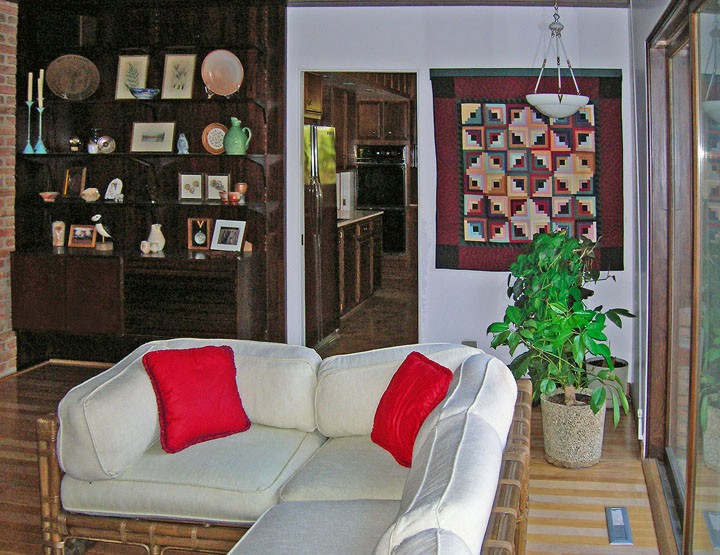 The family room opens to the kitchen on the east side. 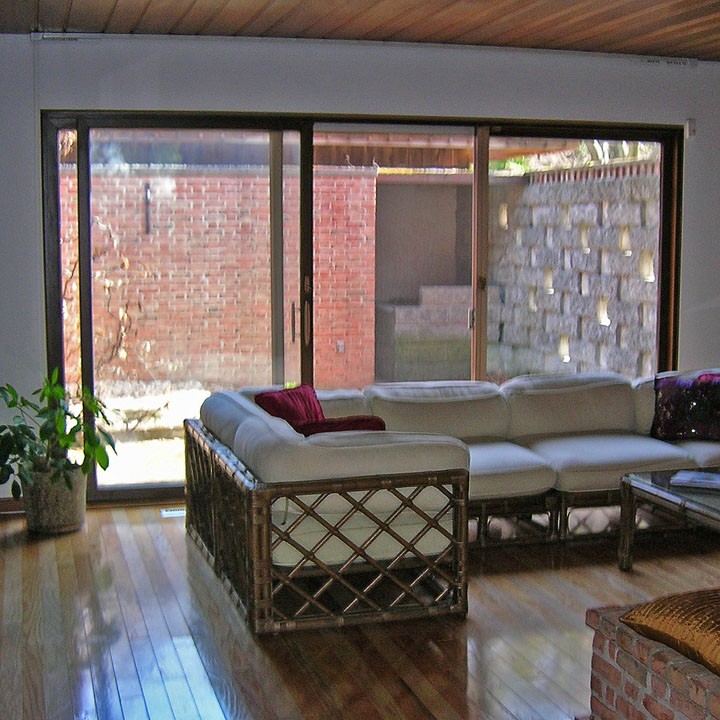 The south wall of the family room opens into a courtyard providing natural light with privacy. 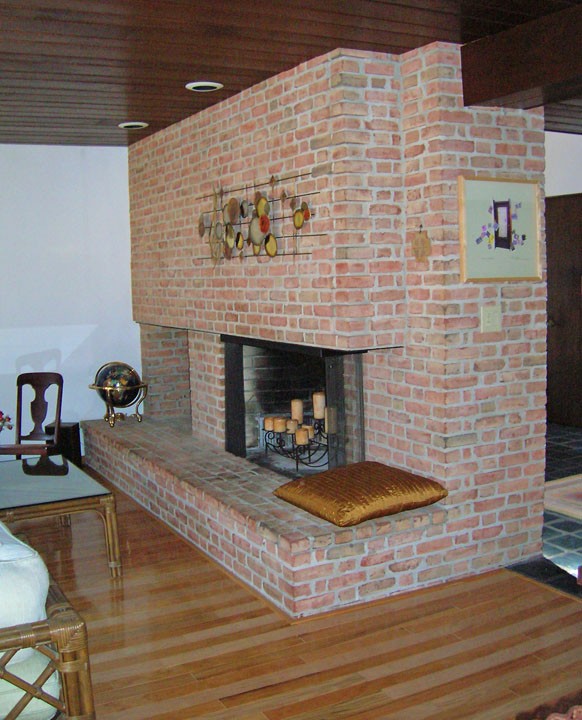 The family room fireplace is also a handsome piece of sculpture. 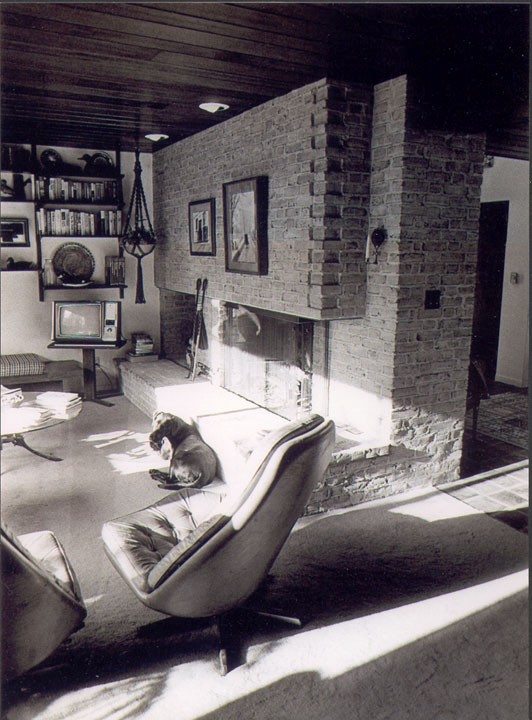 The Heidrich-designed pattern in the brick above the firebox is best revealed in the black and white photo. Note that the mahogany ceiling extends into the staircase bridge in the foyer. 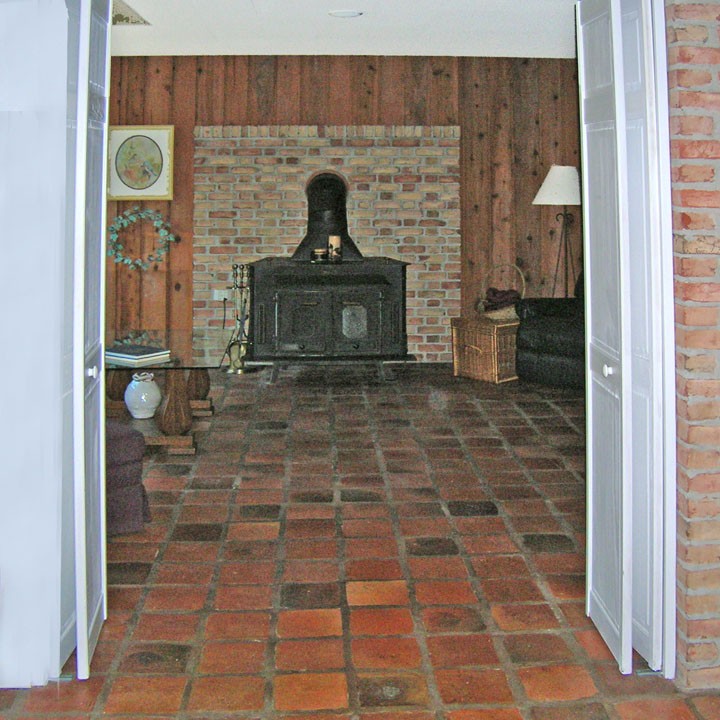 The ground level contains a spacious recreation room with a handsome Mexican-style tile floor. The tile was actually made by the Summitville Tile Company in Ohio. 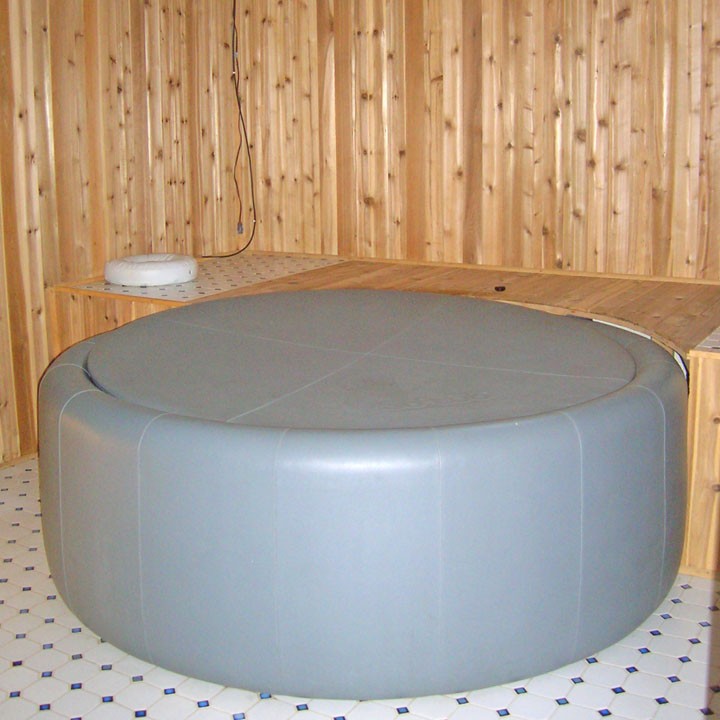 Across a hall and down a level, a knotty-pine walled room holds a hot tub; an in-ground pool is outside. There are a total of five levels to the house.

The dining room has a wall-mounted serving platform for buffet dinners. A glass top originally spanned the unit, with the center area used for display. The drawers were for silverware storage. 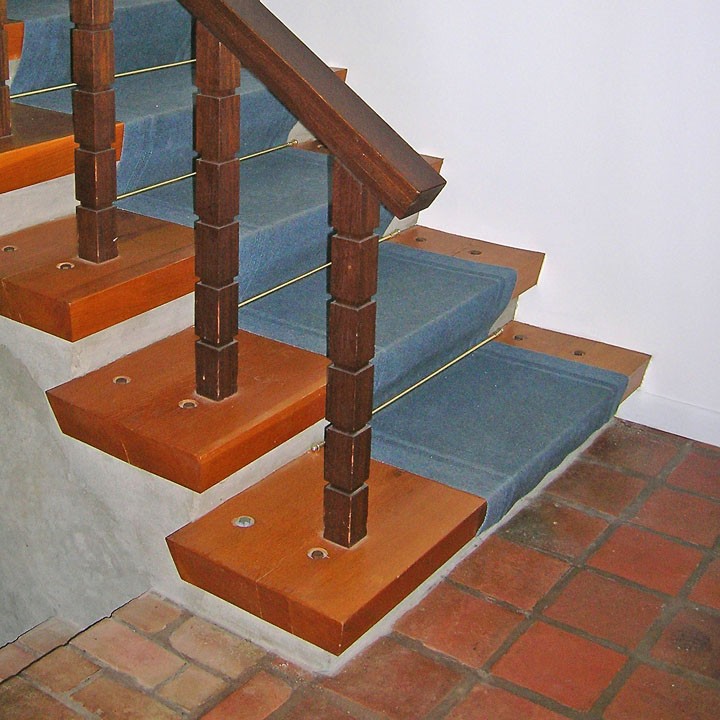 This stairs detail shows the heavy planks used for the treads and their floating appearance. The treads were custom made of six-inch thick oak by Enters Lumber Company. Because of the thickness, the planks were split and kiln dried and then reassembled to prevent warping. Large countersunk lags hold the planks in place in their concrete base. 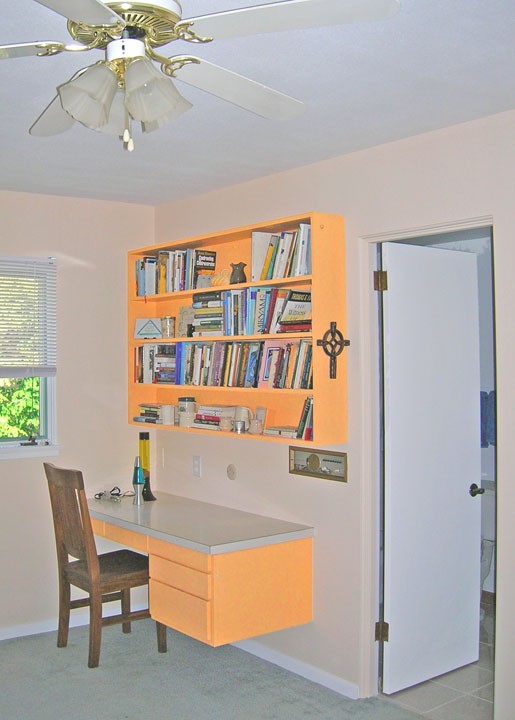 A wall hung desk and book shelves provide a study area for a daughter’s bedroom, with bathroom to the right. 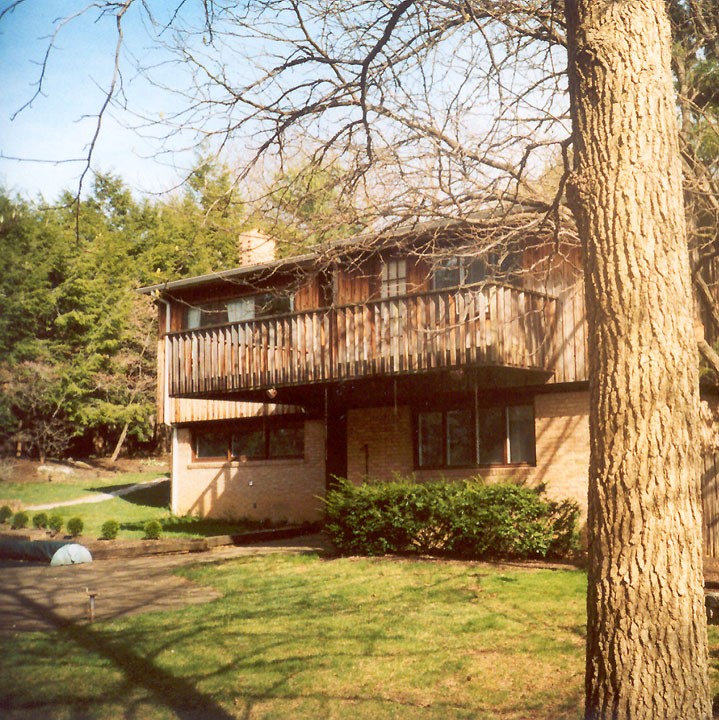 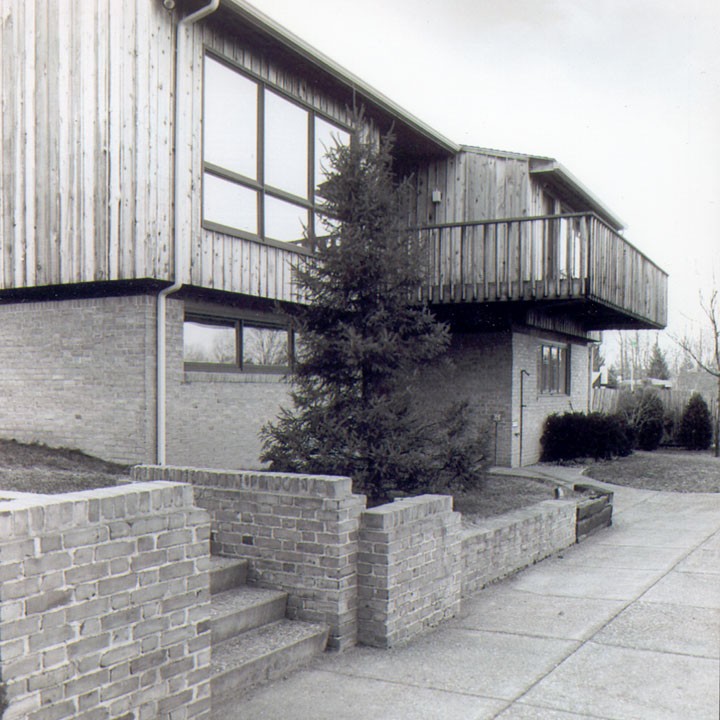 Two views are shown of the master bedroom balcony; the balcony overlooks an in-ground pool. The wood siding is unfinished, rough-sawn cedar, perhaps not to everyone’s taste. An outdoor shower for swimmers is visible in the black-and-white photo.

Black and white photos are by Betsy Overly, courtesy of James B. Smith.