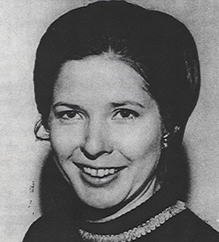 Margita White emigrated from Sweden with her family in 1948 when she was ten years old. She grew up in Southern California and graduated magna cum laude from the University of Redlands in 1959. She developed a strong interest in politics, volunteering and working in several legislative offices. In 1960, she received her M.A. in political science from Rutgers where she was a Woodrow Wilson National Fellow at the Eagleton Institute of Politics. She worked in both the 1960 Nixon and 1964 Goldwater presidential campaigns while pursuing a career in public policy. After working on the 1968 Nixon campaign, she joined the White House staff as an assistant to Communications Director Herbert G. Klein. In 1973, she was named Assistant Director for Public Information at the U.S. Information Agency and in 1975 returned to the White House as, first, Assistant Press Secretary and, then, Director of the restored Office of Communications for President Ford. In 1976, she was appointed to a two-year term on the Federal Communications Commission. After the expiration of her term, she served as a director and then vice chair of Radio Free Europe/Radio Liberty, Inc., and on a number of other corporate boards. Between 1988 and her retirement in 2001, she was president of the Association for Maximum Service Television, Inc., an industry group working on technology policy issues and the primary advocates for high definition initiatives in broadcast television. In April 2001, the National Association of Broadcasters honored her with the acclaimed "Spirit of Broadcasting" award. Margita White died on November 20, 2002.

Margita White traces her career in communications in the federal government, acknowledging male mentors who brought her into positions of increasing responsibility. At the same time, she recognized that she was discriminated against in salary and often encountered antagonistic men in the White House who could make life there difficult. She recalls her work with Barbara Franklin, especially the disastrous first press conference that White arranged for her. At USIA, she was able to become a founding member of Executive Women in Government (EWG), which enhanced her opportunities. She recounts in some detail the difficulty she encountered with her nomination to the FCC. Besides party differences, she experienced charges of conflict of interest because her husband, a tax attorney, was with a firm that was beginning to develop a small practice in communications law. This was one of the first husband-wife appointment controversies. She evaluates the role of President Nixon in the advancement of women in government. In her personal life, she looks back to her grandmother in Sweden as an inspiration: she had been a teacher, a member of parliament, and the author of a number of books. She feels the 1969-1974 period was a watershed for women in government, and believes EWG deserves enormous credit for the work it did.