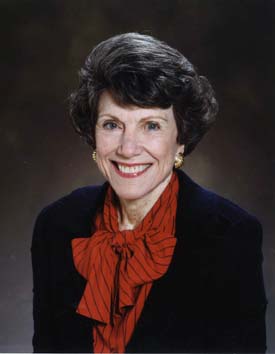 Anne Legendre Armstrong was born in New Orleans and graduated from Vassar College. After work as a journalist, she married Tobin Armstrong, a Texas cattle rancher. In 1966, she became involved in the Texas Republican Party and was elected Co-Chairman of the Republican National Committee in 1971. She was the first woman to deliver a keynote address at the Republican National Convention in 1972 and became a Counselor to the President in 1972. There she served on the president's Domestic Council, the Council on Wage and Price Stability, and the Commission on the Organization of Government for the Conduct of Foreign Policy. In 1976 President Ford appointed her U.S. Ambassador to Great Britain. She served as chairman of the President's Foreign Intelligence Advisory Board from 1981 to 1990, and the Secretary of State's Advisory Panel on Overseas Security. She is currently chairman of the Executive Committee of the Board of Trustees at the Center for Strategic and International Studies in Washington, D.C., as well as a member of the Texas A&M University Board of Regents. She received the Presidential Medal of Freedom from President Reagan in 1987.

Anne Armstrong discusses her experience in Washington as Co-chairman of the Republican National Committee and service as a Counselor to the President in the Nixon White House, dealing with women's organizations and issues, among other responsibilities. In this interview, she provides a wide-ranging assessment of women who made a difference in that period in both the Executive Branch and the Congress. She discusses aspects of her life, marriage, and work and the balance between them in the broader context of feminism and women's rights. She reflects on the approach to advancing equality for women that she felt comfortable with in comparison to more radical feminists, but believes they had an important role to play too. She discusses women in government in other countries as well as in American state and local government.

Listen to the interview.  (HTML transcript).