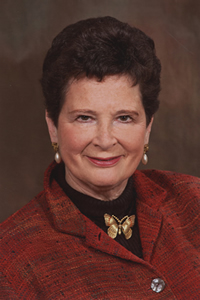 Marina Whitman is the daughter of famed mathematician John von Neumann and his first wife. She was born in 1935 and at various times lived with her mother and then with her father. She received her bachelor’s degree in government from Radcliffe College, married and with her husband moved to Princeton where he was teaching English. Soon she was commuting to Columbia, where she earned her master’s and doctoral degrees in economics. Before her dissertation was complete, her husband took a position at the University of Pittsburgh. She began as a research assistant and instructor and gradually rose through economics faculty to the position of Distinguished Public Service Professor. In 1972, she served as a member of the Price Commission, and as the first female member of the Council of Economic Advisors until 1973, when she returned to the University. She has served on numerous corporate and non-profit boards, and from 1979 to 1992 was an executive and chief economist for General Motors Corporation. Since 1992, she has been Professor of Business Administration and Public Policy at the University of Michigan. She and her husband, Bob, Professor Emeritus of English at the University of Pittsburgh, reside in Ann Arbor, Michigan.

Marina Whitman briefly describes her childhood after her parents’ divorce including living in Princeton, Hungary, Washington, and Cambridge, Massachusetts at various times, with her mother and stepfather, or with her father. She discusses her undergraduate life at Radcliffe and her marriage to Robert Whitman, a soon-to-be English professor. After dealing with sexism in job interviews and graduate applications, she embarked upon graduate work at Columbia and completed her doctorate. She describes following her husband from Princeton to the University of Pittsburgh, and her starting in an economics research project there and gradually working her way onto the faculty until she became Distinguished Public Services Professor. Through the efforts of Paul McCracken and George Shultz, she was named the first female member of the Council of Economic Advisers and the Price Commission under President Nixon. She credits the public exposure she received then for changing her life. Upon returning to Pitt in 1973, she began to serve on a number of corporate boards of directors. Eventually, she was recruited to become Vice President and Chief Economist of General Motors. She compares the differences in experience of being an academic to being a corporate director, and to being a corporate executive. A promotion at GM led her and her family to move to Ann Arbor, Michigan where she was close to Detroit, but still in an academic atmosphere. After her retirement from GM in 1992, she took a half-time appointment in what is now the Gerald R. Ford School of Public Policy. In reflecting on her years in Washington, she noted how sparse the numbers of women were at that time, and how remarkably fortunate she was in her husband and children supporting her various moves and career changes. At the end of the interview, she reflects on her father’s honors in Hungary and his influence on her education and profession.