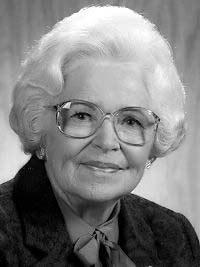 Virginia Knauer grew up in Philadelphia, where her father was a professor of accounting at Temple University, and she graduated from both the Pennsylvania Academy of Fine Arts and the University of Pennsylvania. She became interested in politics in the 1950s and began organizing Republican women's groups in support of President Eisenhower. She was later elected to consecutive terms on the Philadelphia City Council, and became Governor Raymond Shafer's principal advisor on consumer affairs, a new post. She was lured to Washington and took a similar post in the Nixon White House, which she later held under Presidents Ford and Reagan as well. Because of her expertise, she also served on the Cost of Living Council and a number of other White House domestic policy committees. At other times, she formed her own consulting service on consumer affairs, was chair of the non-partisan Council for the Advancement of Consumer Policy, and served on a number of other organizational and corporate boards. Knauer has also been active in Republican politics, historic preservation activities, and has received numerous awards for her public service and work on behalf of the consumer movement.

A pioneer in consumer affairs, Virginia Knauer served in three presidential administrations, but focuses here on her service in the Nixon administration and her entry to political life on the Philadelphia City Council and as head of Pennsylvania's new Bureau for Consumer Protection under Governor Raymond P. Shafer. At the instigation of Pat Hitt, Knauer was recruited to the Nixon White House and began in April 1969 as Special Advisor to the President and Director of the Office for Consumer Affairs. Knauer discusses her attitude to breaking down barriers to women and the importance she placed on bringing intelligent young women into government service and helping to advance their careers, including Elizabeth Hanford Dole, who was her deputy, and Tillie Fowler, who was later elected to congress. She discusses her work in consumer affairs and how it related to regulatory bodies, other domestic policy posts, and to service as an American delegate on the Consumer Policy committee of the Organization for Economic Cooperation and Development (OECD). She also discusses her mentors, family and interests outside of politics and government service.