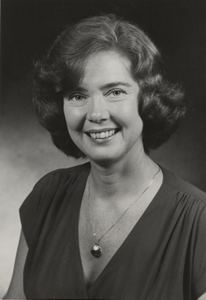 Constance ("Connie") Cornell Stuart graduated from the University of Maryland in 1960. During the course of her career she has served in four administrations: Nixon, Ford, Carter, and Reagan. She began her service in the federal government in 1969 when she was appointed Staff Director and Press Secretary to First Lady Pat Nixon. She held this position until 1973, whereupon she became Director of the International Visitor’s Program at the U. S. Department of State, where she remained until 1977. In 1981 she was appointed Press Secretary at the U. S. Department of Energy, and in 1985 she became Staff Assistant to the Assistant Secretary for International Affairs at the Department of Energy. She left the federal government in 1989. She served on the Board of Regents of the University of Maryland System from 1980 to 1988, where she was Chairman of the Education Policy Committee and Vice Chairman of the Board. She was President of the University of Maryland Alumni Association and Chairman of its Board of Trustees. She currently manages the operations of Rose Hill Farm and is the President of Agathon Development Company.

Connie Stuart begins her interview by discussing her education at the University of Maryland and her work as Press Secretary and Staff Director for First Lady Pat Nixon. She mentions that the amount of pressure her job involved was very intense at times. She mentions particularly the wedding of Tricia Nixon to Ed Cox, which took place at the White House. She cannot remember exactly when she met Barbara Franklin, but believes that it may have been in an appointment. She also mentions that Mrs. Nixon strongly encouraged President Richard Nixon to appoint a woman to the U. S. Supreme Court, and describes her experiences working with the First Lady and the effects of the Watergate scandal on the White House; she says that it did not affect her, but that it was very hard on Mrs. Nixon. She then discusses her job at the State Department and her move to the private sector after Jimmy Carter’s election. She describes her return to the federal government and her work in the Department of Energy as Press Secretary and as Staff Assistant to the Assistant Secretary for International Affairs. She then discusses her home, Rose Hill Farm, which is a National Historic Landmark. Finally she discusses her views on the status of women in government today versus the situation during the Nixon Administration.