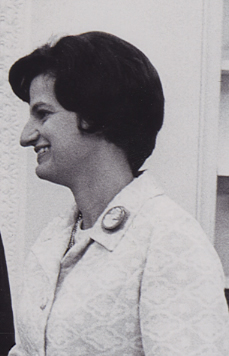 Carol Mayer Marshall was born and raised in Ohio in a politically active family. She recalls her first political experience volunteering to stuff envelopes for Senator Robert Taft’s 1947 campaign at the age of twelve. She attended Mt. Holyoke for two years and had two formative summer experiences – the first as a volunteer for the American Friends Services Committee in a Mexican village, which cemented her dedication to poverty programs, and the second as a congressional intern in 1955. She met and married her husband and had a daughter soon thereafter and completed her degree in political science at George Washington University attending night classes. Graduating in 1960, she went to work for the Republican National Committee as a researcher during the Nixon presidential campaign. She then moved to the Hill as a staffer for Rep. Richard Schweiker of Pennsylvania. Starting as a Legislative Secretary, she moved up with two additional congressmen, and Senators Robert Griffin and Charles Percy as Legislative Assistant, when she was recruited to the Office of Economic Opportunity. She remained with OEO in various roles until 1973, when she resigned and moved to Berkeley to attend law school at the University of California. Upon her graduation she held a variety of positions, most relating to policy issues in poverty and economic development programs. She also became heavily involved in Republican politics in the Bay area, where she still resides today in retirement.

Carol Marshall provides a fascinating review of her career in Washington starting as a secretary then legislative assistant for a variety of congressmen and senators, before being tapped by Donald Rumsfeld to become Congressional Relations Director for the Office of Economic Opportunity in 1971. She describes in some detail, the battle over the OEO budget in 1971, ironically an eventual victory for OEO against Republican opponents of the anti-poverty program, in which Rep. George H.W. Bush and Presidential Assistant Bryce Harlow played pivotal roles. In the course of the following two years she became director of VISTA (Volunteers in Service to America), which she describes as her favorite government program. After OEO’s reorganization, she headed the Office of Program Development, but became disenchanted with the White House’s approach to poverty programs and the developing Watergate crisis. She resigned and entered law school at University of California, Berkeley. In the years following her graduation in 1975, she remained in the bay area as a consultant, lawyer, and briefly a real estate developer. She also describes her continuing interest in Republican politics as a fund-raiser, activist, and unsuccessful candidate for the state senate. She reflects on her experiences as often being the “first woman to….” and how she simply ignored much of the prejudice and plowed on. She gradually saw the problems though and became a dedicated feminist.