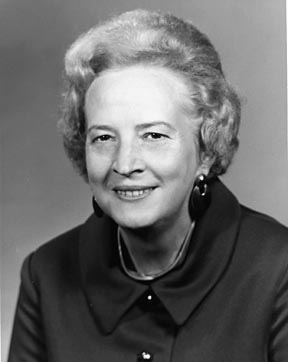 Virginia Allan was a native of Michigan and was an educator and businesswoman, whose interest in women's issues developed through her work as President of the National Federation of Business and Professional Women, where she initiated the idea of a national network of state commissions on the status of women, based on her experience on Michigan's commission. In 1969, she was named chair of President Nixon's Task Force on Women's Rights and Responsibilities. From that group came the report "A Matter of Simple Justice" and from its recommendations grew the Women's Equality Act of 1971. In 1972, she was named Deputy Assistant Secretary of State for Public Affairs, where she served in a variety of roles and was the liaison with non-governmental organizations for the International Women's Year conference in Mexico City in 1975. She also attended world conferences in Copenhagen in 1980 and Nairobi in 1985. In 1983, she helped to inaugurate the United States Committee of the United Nations Development Fund for Women, a non-profit organization created to support projects to promote the political, economic, and social empowerment of women around the world. She also served as Director of the Graduate School of Women's Studies at George Washington University. In 1993, she retired and moved to Florida. She died in Sarasota, August 8, 1999.

Virginia Allan discusses her early work with the National Federation of Business and Professional Women in pushing for equality for women, their development of a talent bank to refute charges of a lack of qualified women, and leadership in fighting discrimination. In part of the interview, Charles Clapp joins the conversation to talk about the selection and qualities of Virginia Allan as chairman of the Task Force on Women's Rights and Responsibilities and the selection of Task Force members. Both agree Catherine East played the key role as staff person, providing information for the Task Force. They discussed the tone of the meetings and the final report, "A Matter of Simple Justice," and the need to be moderate to a point and politically astute to secure acceptance from higher White House staff. They also discussed the broader impact of the Task Force deliberations and recommendations at the state level and how state commissions on the status of women contributed new ideas to the federal level, and how these ideas percolated up towards the International Year of the Woman. In a concluding segment, Virginia Allan discusses her work as Deputy Assistant Secretary of State to establish contacts with non-governmental organizations on foreign policy issues and to coordinate the U.S. observances of the International Year of the Woman. She also briefly discusses her role in the establishment of the women's study center at George Washington University.

Listen to the interview.(HTML transcript).