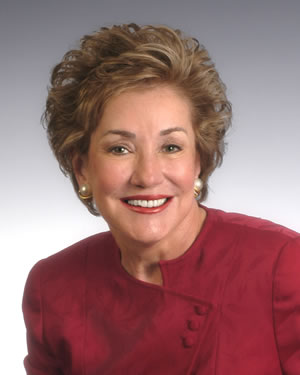 Elizabeth Dole attended Duke University and Harvard Law School. From 1969 to 1973 she served as Deputy Assistant to President Nixon for Consumer Affairs. After spending six years as a member of the Federal Trade Commission (from 1973-1979) she served as Assistant to President Reagan for Public Liaison from 1981 to 1983. She served as U. S. Secretary of Transportation from 1983 to 1987 and as Secretary of Labor from 1989 to 1990; in 1989 she received the National Safety Council’s Distinguished Service Award.  From 1990 to 2000 she was President of the American Red Cross. After her unsuccessful bid for the Republican presidential nomination in 2000, she was elected to the U. S. Senate as Republican Senator from North Carolina in 2002, and served from January 2003 to 2009. While in the Senate she chaired the National Republican Senatorial Committee from 2005 to 2007, and focused her efforts on improving the economy, creating job opportunities, strengthening national security, modernizing the military, improving education, and creating affordable quality health care. She was the first woman to serve as departmental head of a branch of the military, the U. S. Coast Guard, during her years as Secretary of Transportation.

Listen to the interview.  (HTML transcript).