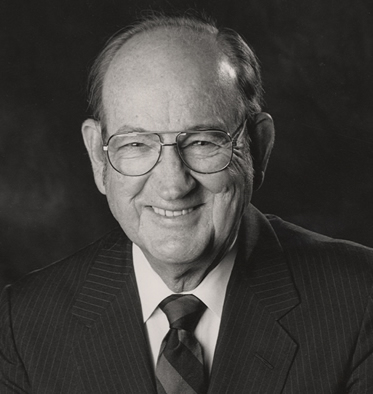 After graduating from the Wharton School at the University  of Pennsylvania in 1955, Charls Walker served as an economist with the Federal Reserve Bank of Philadelphia and as Special Assistant, Vice President, and Economic Adviser to the President of the Republic National Bank of Dallas. He was the Executive Vice President of the American Bankers Association from 1961 to 1969. He served as Assistant and Economic Adviser to the Secretary of the Treasury in the second Eisenhower Administration and as Deputy Secretary of the Treasury during the first Nixon Administration. He holds the Alexander Hamilton Award, the highest granted by the U. S. Treasury. He served as co-chairman of the 1976 Presidential Debates and chaired President Richard Nixon’s Committee on Minority Enterprise and Governor Ronald Reagan’s Task Force on Tax Policy in the 1980 presidential campaign. From 1973 to 1995 he headed Charls E. Walker Associates, a legislative and consulting firm based in Washington, D. C. He has taught at the Wharton School of Finance, Georgetown University, the University of Texas, Texas A&M, and Emory Universities. He currently serves as Senior Adviser to the Center for Deliberative Polling at both the University of Texas and at Stanford University.