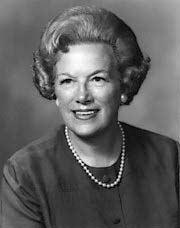 Catherine Dean May was born in Yakima, Washington, and graduated from the University of Washington in 1936 with a degree in education. She later studied speech at the University of Southern California and taught English before becoming involved in broadcasting. She was a writer and assistant commentator with the National Broadcasting Co., New York City 1944-1946, and women's editor at station KIT, Yakima, Washington, 1948-1957. She served as a member of the Washington State Legislature from 1952 to 1958; and was later elected to the U.S. House of Representatives as a Republican, serving six terms (1959-1971) before losing a bid for reelection in 1970. She married Donald W. Bedell in November 1970. She was appointed by President Richard Nixon to the United States International Trade Commission, and served 1971-1981, and also was appointed Special Consultant to the President on the 50 States Project, 1982. She has been president of her own firm, Bedell Associates and is a resident of Palm Desert, Calif.

Catherine Bedell begins by describing her youth in rural Washington, her background in broadcasting, and her involvement in local Republican politics leading to her election to the state legislature. After four years, she ran for and was elected to Congress, a first for the state of Washington. She discusses her women colleagues in the House, their bipartisan efforts to advance women's issues, and her realization that many issues, like hydroelectric power dams—a critical issue for her district—had aspects that were critical to women. In the Nixon administration she was appointed chairman of the Tariff Commission, which later became the International Trade Commission. She discusses the role of Barbara Franklin and believes she played an important role and accomplished a great deal. She reflects on her family background, her strong grandmother and her mother's encouragement, but also teachers and legislative leaders as mentors. She also discusses her experiences with Senators Jackson and Magnusson, the four presidents she worked with, and her work on corporate boards.