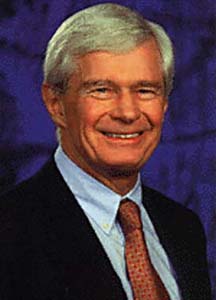 Fred Malek grew up near Chicago and won an appointment to West Point. Following a tour as an airborne ranger officer with the Special Forces in Vietnam, he spent two years in business before coming to Washington as Deputy Under Secretary of the Department of Health, Education and Welfare. In 1970 he became Special Assistant to President Nixon, where he was responsible for recruiting for cabinet-level positions, commissions and boards. He later served as Deputy Director of the Office and Management and Budget and then Member of the White House Domestic Council, before leaving government service in 1975 to join the Marriott Corporation. There he rose to become President of Marriott Hotels and Resorts when he moved on to become President and Co-CEO, and later Chairman, of Northwest Airlines. During the 1990s, he founded Thayer Capital Partners, a finance and investment firm, and serves as a director of several corporations. Malek remained active in Republican political circles and served in advisory roles in both the Reagan and Bush administrations. His book, Washington's Hidden Tragedy, the Failure to Make Government Work, stemmed from his leadership of an effort to improve government management.

In a brief interview, Fred Malek describes his role in hiring Barbara Hackman Franklin, a Harvard Business School classmate, as Special Assistant at the White House to lead the effort to recruit women for top positions in federal government. He characterizes the results as exceeding his expectations, and he reflects on why President Nixon took on this challenge and how the effort was viewed by senior staff in the White House. Malek sees the success of the program as demonstrating that it is possible to accomplish a significant objective in government with a dedicated effort, the right people, a systematic approach, and accountability.