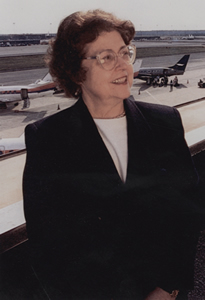 In her interview Betty Southard Murphy begins by describing her childhood, family, and education. She then discusses her experiences in attempting to secure employment after graduating from law school and her first cases for the National Labor Relations Board and her work with the law firm of Robert and McInnis. She describes the work she did for the Paperworkers Union (PACE), which involved a large amount of work with Title VII of the Civil Rights Act. Many of the issues stemming from the cases they handled in the paper industry spilled over and facilitated settlements in other cases relating to discrimination in other industries. She also describes various disputes she had handled regarding womens’ rights. She then discusses her seven Presidential appointments, which include positions as Administrator of Wage and Hour at the U. S. Department of Labor and as the only woman ever appointed Chairman of the National Labor Relations Board, which were her only two paid appointments. She also describes her appointment to the Commission on the Bicentennial of the Constitution of the United States and talks about her belief in the importance of womens’ rights and the challenges faced by women lawyers.