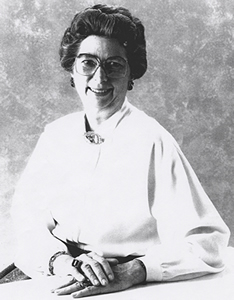 In her interview, Judge Cynthia Holcomb Hall discusses her time at Stanford University, where she earned both her undergraduate and law degrees. She describes the value her father placed on her education, and her decision to enter law school, as well as the difficulties she faced in trying to enter a law firm following her graduation. She replaced the sole woman employed in the Tax Division of the Department of Justice, but never came before a female judge in the four years during which she litigated. Her appointment to the Tax Court in 1972 by President Nixon was part of Barbara Franklin’s effort to increase the number of women in high-level executive positions.  She and her husband John became the first husband-and-wife team to work in the Executive Government, as he was hired by the Assistant Secretary of the Treasury at the same time. However, she says that what made her most attractive as a potential Presidential Appointee was her broad range of experience in various fields, not having been hired by a law firm after completing her law degree, and her previous work on all sides of various tax issues. She describes her feelings on the Presidential Appointments made during this era, calling them the beginning of progress for women in executive positions in government. She also discusses various cases she presided over and issues she encountered during her time as a federal judge.